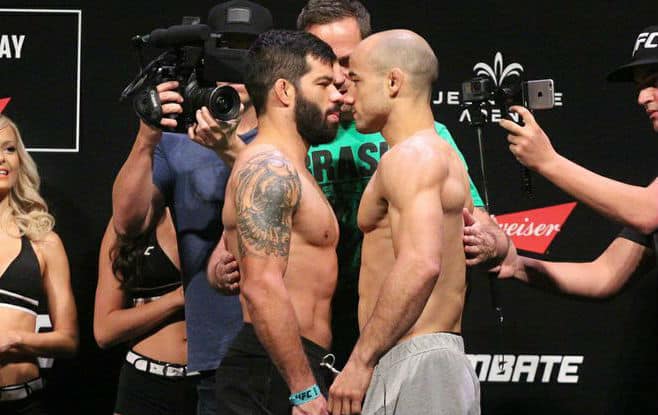 It’s once again fight day here at LowKickMMA, and the talent on display tonight (Saturday, June 3rd, 2017) will come from in the form of UFC 212. Headlining the card are Jose Aldo and Max Holloway, but there’s a whole bunch of great fights also taking place on the preliminary section of the card.

Raphael Assuncao vs. Marlon Moraes in a bantamweight closes the preliminary card on FOX Sports 1. In round 1, Moraes gets clipped by a low kick to the cup but waves off the ref. Moraes with body and leg kicks, throwing his hands more too. Right hand lands for Assuncao, Moraes whiffs on the counter. Body shot for Moraes then a spinning tornado kick misses. Rights for Assuncao. In round 2, Assuncao opens the round with oblique kicks and push kicks. Hard counter right for Moraes, left lands for Assuncao. Moraes leg kicks. Assuncao staying active with the kicks to all levels. Wheel kick just misses for Moraes but the left hook lands a couple times. Multi-punch combination mostly connects, then a body kick for Moraes. In round 3, Moraes snaps Assuncao’s head back with a jab, then a hard low kick. An Assuncao overhand right makes Moraes put his hand on the mat. Moraes fires back immediately after the near-knockdown, upping his output. Moraes answers the leg kick with a double jab. They trade body kicks. Moraes chopping with his own leg kicks, then left hooks. Moraes shoots and seemed to have Assuncao down, but the UFC vet refuses to concede. Spin kick, punch-kick combo for Moraes. They exchange to the bell.

Antonio Carlos Junior vs. Eric Spicely is next in a middleweight bout. In round 1, Junior comes out pressuring Spicely, who’s backed to the fence. Spicely shoots and gets the double-leg. Junior elbows from the bottom and then wraps up a leg. Spicely does some ground and pound until he’s forced to defend the leg. Junior takedown right to the back fishing for a choke but the bell sounds. Junior comes out in the round trying to work his jab, but Spicely shoots. Junior stuffs and gets on top in half guard. Spicely wraps up a leg. Junior locked in the rear-naked choke for the win.

Johnny Eduardo vs. Matthew Lopez is next in a bantamweight bout. In round 1, Eduardo starts off with a pair of blistering leg kicks and then a right hand. Lopez answers with his own hard right. Lopez tries to enter on a shot but Eduardo’s fast hands make him reconsider. The 135ers bomb on each other in the pocket. Lopez in on a double and has Eduardo down. Eduardo diving on the leg lock and he’s eating some shots for it. Eduardo has a hold of a leg but Lopez is punishing him with punches. He stacks and hammerfists away. Lopez finishes it!

Iuri Alcantara vs. Brian Kelleher in a bantamweight bout opens the FOX Sports 1 preliminary bouts. In round 1, after having a slow start, Kelleher turned up the pressure and was landing some good shots. Alcantara shot in for a takedown and scored a single-leg. However, Kelleher caught him with a guillotine choke for the win.

Viviane Pereira vs. Jamie Moyle in a strawweight bout finishes off the UFC Fight Pass preliminary card. In round 1, Pereira fires off some long right hands, including a counter to a Moyle leg kick. Moyle 1-2, leg kick again. Pereira catches kick. Moyle finally exits the clinch. They trade jabs and Moyle goes back to kicking. Pereira counters a kick with a hard right hand. Pereira keeps her jab pumping. She pushes forward behind a combination after Moyle off-balances herself. In round 2, Pereira is busier now when that was Moyle in the first round. Moyle seems hesitant to box now as her face is getting marked up. They clinch. Pereira dirty boxes while Moyle knees the body. Back in space Pereira getting aggressive, throwing hard and in combo. Moyle starts upping the output. Lands body and leg kicks but then gets another kick caught and got dumped. Pereira was kicking the legs. In round 3, it’s Pereira leading, and she’s too fast and throwing longer combinations, Moyle’s counters doing little. Pereira runs away with the decision win.

Luan Chagas vs. Jim Wallhead is next in a welterweight bout. In round 1, Wallhead comes out throwing hands, but he eats a headkick and then a flush 2-piece. Chagas already has the range, tagging Wallhead. Chagas chops away with leg kicks and tags Wallhead repeatedly with the left hook. Wallhead is staggered and shoots, but gets stuffed. Wallhead seems to have his feet back under him, but he eats another couple of shots. Wallhead is short on a lot of his punches. Wallhead shoots and gets stuffed again. Chagas w/ a front kick to the chin. Wallhead with a right but eats another counter. In round 2, Chagas goes back to bashing Wallhead to start the round Wallhead lands his best punch with a right hook. Front kick strays low on Wallhead. Wallhead aggressive once again but Chagas’ defense and footwork are giving him problems. But he lands shots while eating return fire. Chagas shoots but Wallhead stuffs it. Wallhead takes a bad eye poke. Wallhead’s eye partially shut but the Dr signs off, and they’re back at it. Chagas drops Wallhead with a left hook and jumps on the back for the rear-naked choke finish.

Opening the UFC Fight Pass prelims is Marco Beltran vs. Deiveson Figueiredo in a flyweight bout. In round 1, Betran opens with kicks from a long stance, Figueiredo steps in with a body kick and follows it in for a takedown attempt but stuffed. Figueiredo steps over to half and grabs hold of Beltran’s neck. Beltran kicks off the cage and rolls to top, still in guillotine. Figueiredo holds onto the choke for a long time but can’t finish it. Beltran pops his head out with 1 min left starts dropping elbows. In round 2, Beltran goes back to work with leg and high kicks. Figueiredo bull rushes and off balances a kicking Beltran, gets on top, mounts. Figueiredo back in half guard now elbowing the head and body. He stands and eats an upkick, stacks and drops bombs, takes the back. Beltran defends the heel hook and gets back up. Figueiredo with right hook to body, standing elbows that stagger, drop Beltran. The referee called it and that’s a wrap. Figueiredo scored the win.

Welterweight: Luan Chagas def. Jim Wallhead by submission (rear-naked choke) at 4:48 of Round 2