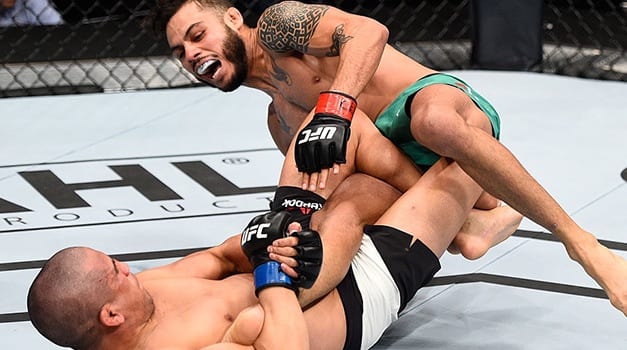 They were considered the forbidden technique for years in Jiu Jitsu, but today heel hooks are among the most popular techniques to learn.

Instructors in the past refused to teach heel hooks to their students, because of how potentially dangerous they can be. Also since they were banned in most every competition, they weren’t taught in many Jiu Jitsu schools.

But now they’re gaining popularity thanks to professional grappling competitions like Polaris, EBI, and ADCC. Specifically from grapplers like members of the Danaher Death Squad, Craig Jones, and Lachlan Giles. Their proficiency with heel hooks is superb and shows their effectiveness.

In modern day Jiu Jitsu, you can’t afford to ignore 50% of the human body anymore. So we’re going to tell you everything you need to know about heel hooks. Everything from when they were developed, their mechanics, and various different entries into them.

When was the heel hook created?

This is another submission you’d have to go back centuries. For centuries people have been aware of the power of heel hooks. They knew that if locked on to a person’s heel and turned it, you could cripple them.

In modern times, the martial arts more credited to evolutionizing the heel hook was sambo and submission wrestling. Jiu Jitsu and Judo knew the techniques, but for the most part they were forbidden due to them being dangerous.

It wasn’t until the last 20 years that Jiu Jitsu practitioners have been adopting heel hooks into their games. Many credit Dean Lister with being the grappler with first popularizing them and later John Danaher with his system.

How does a heel hook work?

Also there is a common misconception about the heel hook among those new to grappling. A heel hook doesn’t put pressure on the opponent’s heel. It is actually the knee that absorbs the pressure of the leglock.

This is due to the lever system of the submission. Once you lock in the submission, your opponent only has less of a second to tap or damage your knee.

Before  you can even think about getting the heel hook, you have to control the opponent’s leg. If you don’t establish control of the leg, then you have no chance of getting the submission.

There’s numerous methods to control an opponent’s leg, but they all share the same principle. Control your opponent’s leg above their knee.

You have to do this along with keeping your hips aligned with your opponent. The other thing is get their leg to bend at an angle to be able to get the heel hook.

So after getting control of the opponent’s leg, you can now go for their heel. Turn your body towards the opponent’s heel. Hook it using the blade of your forearm, so it’s tight and won’t slip out.

Once you secure their heel, turn towards your back shoulder to apply the pressure.

There is a heel that is even more dangerous and vicious than a normal heel hook. That submission is the inside heel hook. It comes on fast and can tear a knee in less than a second.

The main differences with an inside heel hook is you attack the inside of the opponent’s heel. Their heel is also tucked on your inside heel, whereas a normal heel hook is done on the outside hip.

One of the most common and easiest leg control to get an inside heel hook is from the saddle position. This is where you triangle your legs around the leg you’re attacking and hook their outside leg with your foot.

Once you establish control of the leg, getting the heel is the same concept as a normal heel hook. Turn your body into the hook and control it with the blade of your wrist.

From there turn slowly towards your other shoulder and they should tap rather quickly.

Craig Jones has a rather interesting heel hook set up he does from a modified position. It is sort of a mix of butterfly and single leg x guard.

His legs are hooking the opponent’s leg above their knee with his legs off the ground. Jones takes an underhook and scoots himself toward the leg he’s controlling.

He then reaches under the opponent to grab the other opponent’s foot and elevates them. Bringing his bottom leg through, brings his knee in, and taking his opponent over.

Craig ends up in a saddle position, where he has the option of attacking an inside or outside heel hook.

When you’re on top in half guard, there is a really easy heel hook setup you can do. If the opponent is doing a knee shield half guard even better, because their leg is already bent.

From here all you do is put your free knee on their belly and fall back towards their heel. Lock your grip and take their heel.

If they defend by rolling just roll with them and finish the submission.

Half guard to ashi-garami heel hook

Now for the other side here is a heel hook setup from bottom half guard. It starts from a knee shield, where you put the foot of your knee shield leg between the opponent’s legs.

For the next step you reach over with both arms and grab behind the opponent’s arm and knee. Use these grips to pull yourself into your opponent and rotate into ashi-garami.

From here you have your choice of an ankle lock, toe hold, or heel hook.

There’s a nice setup from when you fake a standing guard pass and do a back step for their heel. Take head control on your opponent and grab hold of their ankle with your other hand.

When you get these grips, you just step your lead leg between their legs and backstep with your back leg. Your back leg goes on the outside of their other leg.

For the last steps take your hand off their head and grip under the opponent’s knee. Then just slide in and take their heel.

Tips for doing the heel hook

When you go for a heel hook, your technique needs to be perfect. Any flaw in your technique and it won’t be likely that you’ll be able to get your submission. Remember these tips to make sure your heel hook is picture perfect.