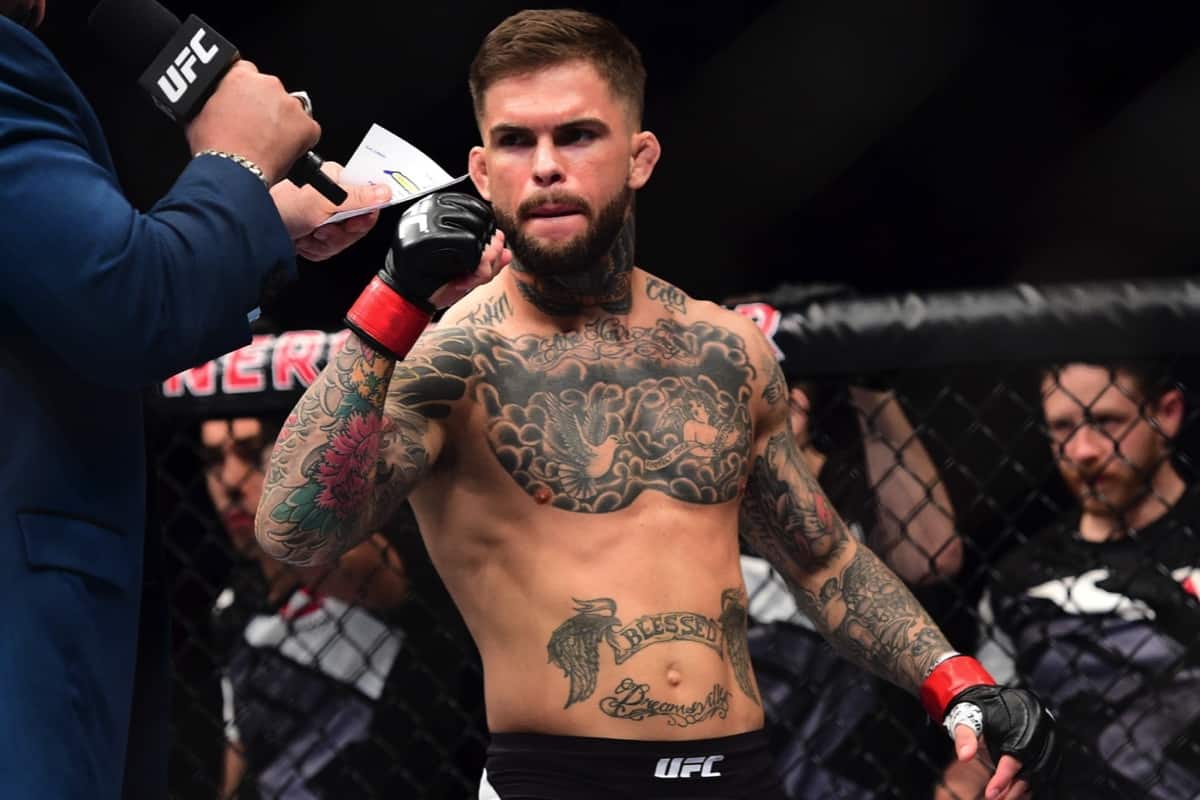 We are live here at LowKickMMA for UFC 202, perhaps the biggest event of the year. The fights emanate tonight (August 20, 2016) from the T-Mobile Arena in Las Vegas, Nevada. Headlined by the epic rematch between Nate Diaz and Conor McGregor, the card is stacked from top to bottom, including the preliminary portion.

The prelims were headlined by bantamweight contenders Takeya Mizugaki and the hard-punching Cody Garbrandt. “No Love” opens up with a hard leg kick, but eats a nice jab after the Japanese vet slips a punching combination. The two exchange punches on the inside that are mostly blocked, but Mizugaki seems hurt by a Garbrandt right hand. A straight right down the pipe drops Mizugaki, but the ultra-tough Japanese veteran tries valiantly to recover. Garbrandt hammerfists and punches on a Mizugaki trying to get back to the fence eventually render him defenseless. Garbrandt mounts the cage, another first round knockout to his credit.

Action bantamweights Raquel Pennington and Elizabeth Phillips kept things going on FS1. At the start of round 1, the two women engaged in a feeling out process that did not see either woman land anything of note. Phillips then landed a hard leg kick before initiating a clinch against the fence. Pennington does a nice job landing knees to the body as Phillips continues to push her into the cage. With about 1:20 left in the round the separate. Phillips is coming up short on her punches. Pennington initiates another clinch and lands a hard knee to the body. She drags Phillips to the floor but Phillips pops right back up. As Pennington looks for another takedown, Phillips jumps up for a guillotine on a standing “Rocky””. Pennington slips out and the round ends with the two jockeying in the clinch. Round 2 begins with Pennington pushing forward into the clinch again, but Phillips reverses her and looks for a takedown. As she gets Pennington down, “Rocky” threatens with an arm-in guillotine. Phillips extricates herself, but Pennington gets right to her feet. Phillips continues to push Pennington into the cage looking for a takedown, but Pennington continues to deny her. Pennington briefly has the top-ride position and lands punches before Phillips returns to her feet. Pennington gets a takedown and lands a few punches before the round ends. Round 3 starts with “Rocky” pushing into the clinch. After a few seconds of jockeying, she gets a takedown and takes Phillips’ back. As she fishes for a choke, Phillips escapes and turns over into Pennington’s guard. Phillips lands some strikes on top before they return to their feet. Pennington eventually reverses Phillips and gets a brief takedown put can’t do anything with it, and the bell rings to end the fight. “Rocky” takes the judges’ scorecards by 30-27 marks across the board.

Featherweight teammates of the main event fighters, Artem Lobov and Chris Avila are next up on Fox Sports 1. After a brief feeling out process, Lobov has success with leg kicks and kicks and punches to Avila’s body. “The Russian Hammer” has continued success with leg kicks, while Avila is having a hard time connecting. Avila tries to get his counter boxing game going, but Lobov is out of reach of Avila swiping strikes. The two briefly clinch, before Avila lands a jab. Lobov goes back to pounding Avila’s body with left hands and body kicks before another clinch. Avila lands short punches to the head as the round ends. Round 2 starts much the same as round 1. Lobov pressures Avila to the fence as before. Avila is having a bit more success, able to keep himself out in the middle of the cage more than the last round. But Avila is still pulling away from Lobov’s shots, making his own strikes less effective. Avila has mild success in the clinch with knees to the legs and body before Lobov stuffs a takedown attempt. The Irish native is landing shots to the head and avoiding most of Avila’s return fire. Avila is getting bolder, taunting Lobov and going to the body with punches. The round ends with Avila sustaining yet another hard leg kick. Round 3 starts with Lobov once again backing Avila to the fence, peppering his legs and body with kicks. Avila fires off a few high kicks, but they miss. The two clash heads, opening a gash on the top of Lobov’s head. The doctor comes to check but quickly clears him to continue. Avila tries to punch his way into the clinch, but Lobov shucks him off. Avila lands a nice 1-2, his best strikes of the fight. He then lands a head kick, but it lands with his foot, without too much power. Lobov slips on a kick and falls down, and Avila jumps on top. Lobov uses a leg lock attempt to get back to his feet, and resumes stalking Avila. The fight ends with a Lobov wheel kick that hits Avila’s shoulder. Lobov sweeps the scorecards for a unanimous decision.

Women’s strawweights Randa Markos and Courtney Casey duked it out to kick off the FS1 prelims. In round 1, the two exchanged punches before clinching up. Markos used a head-and-arm throw to land in side control, but she had to fight Casey off from taking her back. Casey did in fact take her back, landing hard strikes. Markos turned over and reclaimed half guard, but continued to eat hard shots. Markos was able to escape an awkward position to get into Casey’s guard, where Casey attacked with submissions immediately. After getting her leg across Markos’ face, she tightened down an armbar, going belly-down to elicit the verbal submission.

In the UFC Fight Pass headliner, Neil Magny battled welterweight striker Lorenz Larkin. Magny starts with a few jabs, but Larkin responds with a leg kick. Larkin snaps a hard jab of his own, and then pushes Magny to the fence with a very hard front kick. Larkin lands another one a few seconds later that knocks Magny down. Magny is backed to the fence as Larkin tees off with leg kicks and punches. Magny is limping with visible damage to his lead leg. Magny tries to drag Larkin to the mat, content to go to his back, but he can’t keep Larkin down with him. Magny shoots for a takedown, but Larkin tees off with elbows to the head until referee Dan Miragliotta has to step in.

Colby Covington took on another UFC debutante in Max “Pain” Griffin at 170 pounds. The two exchanged hard punches early, with both landing. Griffin also landed a few kicks to the body. Covington hit a single-leg takedown pretty easily, but Griffin countered with a kimura attempt. Griffin had it behind Covington’s back and used it to roll him over and get on top, but the former NCAA All-American got back to his feet quickly. Covington pushed Griffin into the cage and worked for another takedown, which saw him land straight into mount. Griffin regained half guard, but had to eat some hard shots. Covington would switch from side control and half guard when Griffin was able to reclaim it. The first round ends with Covington back in full mount landing big elbows. Round 2 saw Griffin try to land big shots early. He stuffed Covington’s first takedown, only to eat a big left hand and get taken down anyway. Covington got back control on a turtled Griffin, peppering Griffin with punches all the while. He briefly transitioned to full mount once again before Griffin exploded out, but had his back taken once more. The round is an all-out mauling for “Chaos” Covington, who probably earned himself a 10-8. Round 3 begins with Griffin landing a hard right hand, but his leg kick is caught by Covington, and he’s back to where he was in round 2. Covington ties up Griffin’s right hand, so he is free to tee off with his left hand. A continuous volley of left hands to the head forces the referee to intervene. Colby Covington takes it by third round TKO.

The card kicked off on UFC Fight Pass with a middleweight bout between Alberto Uda (9-1) and UFC newcomer Marvin Vettori. The southpaw Vettori opened up with a kick to the body and then an overhand left. The two clinched on the cage, which Uda turned into a takedown. Vettori reversed to end up in Uda’s guard. Uda utilized a body triangle from the bottom while Vettori opened up with some hammerfists and punches to the body. The Italian stacked Uda against the cage to continue to land ground and pound. As the Brazilian went to the turtle position to try to get back to his feet, Vettori sunk in a guillotine and dropped to his back. A few seconds later the tap comes, giving Vettori the first round submission victory.

Cody Garbrandt def. Takeya Mizugaki by TKO at 0:48 of Round 1

Courtney Casey def. Randa Markos by submission (armbar) at 4:34 of Round 1

Colby Covington def. Max Griffin by TKO (punches) at 2:18 of Round 3

Marvin Vettori def. Alberto Uda by submission (guillotine) at 4:30 of Round 1