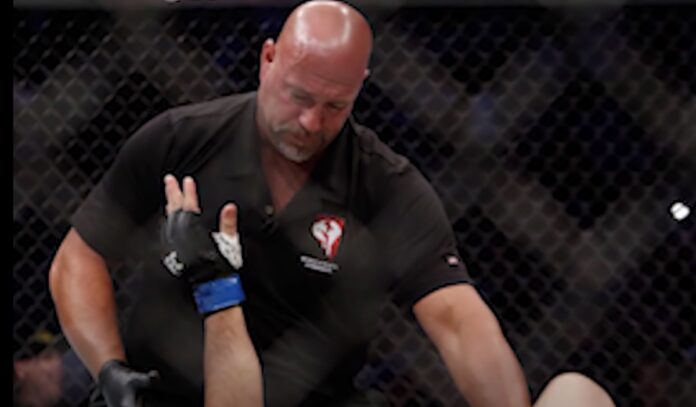 One of the most known referees in MMA is none other than Dan Miragliotta. The massive ref that towers over even the biggest heavyweight fighters.

Many know Dan Miragliotta as an MMA referee, but not as many know the story of how he became one. Let’s go over Dan Miragliotta’s history and how the most intimidating referee in the sport got into MMA.

Going from how an accident led him to start training, running his own MMA shows and then becoming a referee. We’ll also detail some of the most famous fights Dan Miragliott refereed and also some of his controversial moments.

Dan Miragliotta got into martial arts at the age of 14 after a body surfing accident. What happened was Dan was out in the water during high tide and caught a big wave.

Unfortunately, Dan misjudged the size and direction the wave was going and crashed onto the beach. When he crashed, his neck slammed against the back of another person on the beach.

At first, Miragliotta didn’t know that he had seriously damaged anything until two weeks later. He couldn’t move his neck and felt that something was seriously wrong.

After a doctor’s visit, Dan Miragliotta discovered that he had broken two vertebrae in his neck. If they broke just a fraction of a centimeter more, Dan would’ve been permanently paralyzed from the neck down.

The injury had left Dan Miragliotta his coordination and balance compromised. To help get it back, he began practicing Shito Ryu Karate.

Slowly, Miragliotta started to get his balance and coordination back from the Karate training. He would actually take a liking to the training and began competing after being cleared by a doctor.

Through his body surfing injury, Dan Miragliotta had found a new passion in martial arts.

Dan would receive his black belt in Shito Ryu Karate when he was 18 years old. He wasn’t satisfied with just learning that style of Karate and wanted to expand his martial arts abilities.

This would lead him to start training in Kenpo Karate. A more aggressive style of Karate than the previous style he had learned.

Miragliotta would compete regularly in full contact Kenpo events and become very talented at this style. This would lead him to becoming a 5th degree black belt in Kenpo later on.

While Dan Miragliotta took up Kenpo, he also began training in Doce Pares Eskrima. A version of the deadly Filipino stick fighting martial art. At the same time Dan was competing in full contact Karate, he would also compete in stick fighting competition.

As time went on, Miraglitotta would continue learning other martial arts. He would begin learning shootfighting and Muay Thai and even go through courses to become an instructor in both.

He currently holds the titles of senior Muay Thai instructor under Vut Kamnark and 3rd level shootfighting instructor under Bart Vale. Miragliotta would also take up BJJ later after becoming an MMA referee and is currently a blue belt under Renzo Gracie.

How did Dan Miragliotta become an MMA referee?

Before Dan Miragliotta became an MMA referee, he started running his own MMA shows in the 1990s. He would run a total of 24 MMA events in the New York and New Jersey area.

Being a big intimidating figure with an extensive martial arts background made him the perfect person to be a ref. Other MMA promotions would begin asking Dan to ref at their events and would even become a licensed boxing referee.

Through his early years of officiating, Miragliotta kept building up his experience and skill as an MMA ref. Every month, he would regularly work MMA shows around the east coast.

Dan would get his break into big time events when he made his referee debut for the UFC on UFC 78. Since then, Miragliotta has worked with the UFC for 15 years and every other major MMA promotion.

Dan Miragliotta has been the third man in some of the biggest fights in MMA history. Here are some of the most notable events that he has officiated in.

No MMA referee has never not been criticized for their decisions in the cage and that includes Dan Miragliotta. Here are a few of the controversies that Dan Miragliotta was at the center of.

One highly criticized event Dan Miragliotta was a part of was the Kimbo Slice vs James Thompson main event on EliteXc. Thompson came into the fight with a massive cauliflower ear the size of a balloon.

Of course during the fight, the ear was punched and it exploded, which led to blood spraying over the cage. Miragliotta quickly stopped the fight and was criticized by the announcer Gus Johnson.

Miragliotta was just doing his job and looking out for the safety of Thompson. What was more controversial was Thompson claims EliteXC officials told him not to drain the ear.

The fight doctor working the event even cleared him with the gigantic contusion on his ear. This was just one of the many controversies that surrounded the EliteXC promotion before it folded.

In the main event of UFC 112, Anderson Silva defended his title against Demain Maia. There was a lot of inaction in the fight as Maia would stay on his back and Silva would not engage.

Silva did more of his taunting than usual to try and get Maia to stand with him and fight. Some criticized Dan Miragliotta for not warning Silva to stop his taunting and to force the fighters to engage.

It was a lackluster fight, but not totally the fault of Miragliotta as he is just a referee and not a fighter.

At Bellator Europe 4 in Dublin, the main event was Michael “Venom” Page vs Richard Kelly. Page is known for his antics in the cage and Miragliotta apparently wasn’t a fan of them.

During the fight, Miragliotta would deduct a point from Page for excessive taunting. Venum would then deliver a flying knee KO and would taunt Kelly more after knocking him out.

Miragliotta apparently didn’t like that move either and according to Page, called him “a piece of s***.” This drew heavy criticism from many in MMA as Miragliotta let personal feelings get in the way of his professional duties.

Since then, Page said Dan Miragliotta has apologized to him and the event is in the past.

The latest controversy with Dan Miragliotta may also be the biggest of his career. At the Triad Combat event, he was the referee for the Frank Mir vs Kubrat Pulev fight.

This was a boxing event, where the fighters were wearing MMA gloves. Kubrat is a former boxing world champion and outclassed Mir throughout the first round.

He delivered a devastating left hook that clearly knocked out Mir on his feet. Miragliotta had a slow reaction to stopping the fight as they all stood around for a few seconds.

Thankfully Pulev knew Mir was out and didn’t follow up with any more punches. Obviously not the best job Miragliotta has done in the cage or ring.

Is Dan Miragliotta a good referee?

While Dan Miragliotta has had some questionable performances as an MMA referee, he is far from a bad one. Many top referees like Big John McCarthy think very highly of Miragliotta.

The big man in the cage has been officiating fights for 20 years and has been great more times than not.

Dan Miragliotta has officiated in fights around the world in nearly every major MMA promotion. When he isn’t the third man in the cage, Miragliotta coaches Muay Thai, Jiu Jitsu, and shootfighting. Coaching 2 nights a week, Monday to Friday at Five Star Personal Fitness Training Center.

You can expect to see Miragliotta continue reffing at every major MMA event in the future. Like him or not, he is one of the most respected MMA referees in the sport.