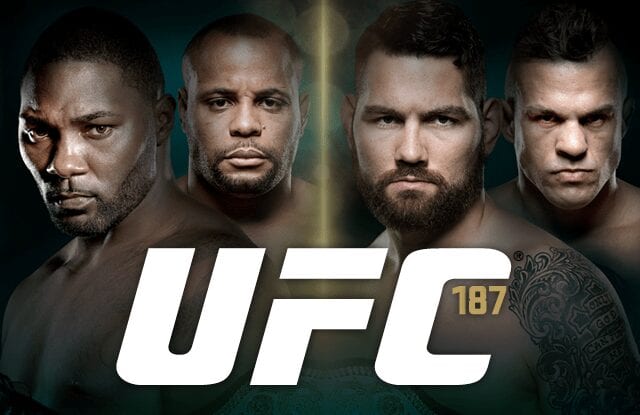 UFC 187 is in the books from Las Vegas, Nevada tonight (Saturday, May 23rd, 2015). The MGM Grand Garden Arena played venue to yet another stacked night of action, and the PPV (pay-per-view) card had a lineup of fights that rivaled some of the best cards in UFC history.

At the top of the card is a light-heavyweight title showdown, as Daniel Cormier and Anthony Johnson collided to decide the new champion of the vacated division. Johnson came out with a hard low kick and a brief eye poke halted the action. ‘Rumble’ dropped him with a huge overhand right, rushing in to search for the finish. Cormier clinched and slammed ‘Rumble,’ taking his back and transitioning to a single leg. ‘Rumble’ hit him with some punches on one leg, but it was playing out to Cormier’s strengths. Johnson broke to unload two head kicks, and Cormier landed a big overhand right. Johnson snapped a big body kick, but again ‘DC’ stifled his striking power. ‘Rumble’ landed some good power shots as the bell sounded on a back-and-forth first round.

The second saw ‘Rumble’ land a big right hand and two huge head kicks, wobbling ‘DC’ with two body kicks. Cormier sought and got a huge lifting slam to land in ‘Rumble’s’ half guard. Cormier looked for a kimura, wrenching it twice and raining down elbows and punches. Johnson was cut open by the elbows as blood poured out above his eye when the bell sounded. Johnson came out aggressive with punches in the second but he slipped. He recovered to take down Cormier, landing some right hands when he got back up. ”Rumble’ gave up his back Cormier locked on a tight rear-naked choke to earn the submission and become the new UFC light heavyweight champ.

Chris Weidman and Vitor Belfort go to war with ‘The All-American’ putting his middleweight strap on the line in a co-main event for the ages. Weidman came out with a head kick, rushing into a wild scramble. The champ landed a knee but Belfort fought back with a huge kick and knee of his own. Belfort was unloading endless strikes, wobbling the champ. He landed a left hook and Weidman came back with two jabs, securing a takedown to go into half guard. Weidman landed elbows and ground strikes, smothering Belfort on the ground. He mounted Belfort to rain down an endless streak pf punches that had Belfort’s head bouncing off the canvas for the stoppage from refere Herb Dean.

Donald Cerrone had big plans, but late Khabib Nurmagomedov replacement John ‘The Bull’ Makdessi was standing in his way. Cerrone landed a hard low kick early, pushing forward with some strikes to eat a left hand. He nailed Makessi with two head kicks and another leg kick. ‘The Bull’ grabbed a kick to land, and Cerrone kept up his high volume of kicks. Makdessi worked the body and head, throwing a spinning back kick before Cerrone landed more leg kicks. The close first round ended with an exchange. Cerrone was aggressive at the start of the second, landing combos and a big knee followed by a kick. Makdessi landed a left and ate a kick, finding a home for another left to eat another kick. Cerrone snapped punches and knees, snapping a huge head kick that had Makdessi call a timeout to earn the strange stoppage.

Heavyweights Travis Browne and Andrei Arlovski have unfinished business, as the former Jackson’s MMA teammates squared off for crucial divisional positioning. Arlovski landed some rushing shots early, following with a big hook to wobble Browne. He unloaded hugecombos and a knee, working the body as ‘Hapa’ persevered. Browne landed a big shot but Arlovski countered, dropping him with a flurry. ‘Hapa’ was dropped by a backfist as Arlovski unloaded but Browne somehow dropped Arlovski with a big shot to land some clubbing ground shots. Arlovski got up to land a knee and a huge uppercut, unloading to finally earn the finish in one of the craziest fights of the year.

Flyweight stars John Moraga and Joseph Benavidez open the action-packed main card at UFC 187. Benavidez dropped Moraga early, looking for a choke from the half guard. Although Moraga got up, Benavidez rushed for another takedown and clinched. A massive twirling scramble lead to another big double leg from Benavidez as he won the round. Moraga scored with some decent strikes in the second, and Benavidez struck back with some punishing strikes. Moraga scored some thudding low kicks, following with body and head kicks. Benavidez got a takedown and used top control to ride out the rest of the round. It turned into a slugfest in the third, with both fighters throwing and landing big shots. Moraga was scoring with huge shots but Benavidez got a quick single to again control the action, taking home the unanimous decision.