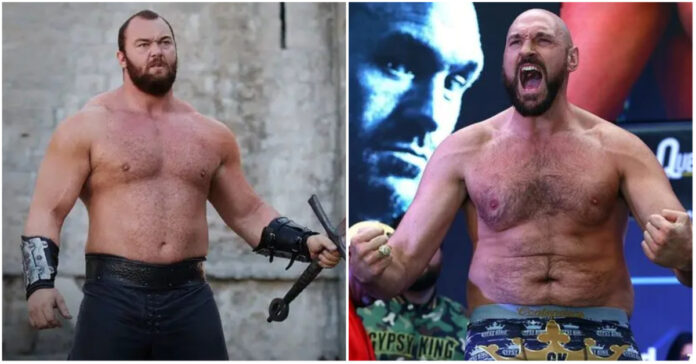 Despite the fact that Tyson Fury announced his retirement after defeating Dillian Whyte in Wembley this past April, it hasn’t stopped him from wanting to put fists to faces following his back and forth with Hafthor Bjornsson.

In the meantime, Fury has since been teasing fans about a possible return to boxing to face the rematch winner between Oleksander Usyk and Anthony Joshua – for the right price of £500 million.

However, Bjornsson, the man most recognized for his part in the Game of Thrones series, has been the primary pursuit for the ‘Gypsy King’ as he looks for a life within the relatively new world of celebrity boxing.

Tyson Fury and Bjornsson go back and forth on social media

Admittingly, reports as of late have indicated that Fury is focused on a hybrid fight between himself and the UFC’s heavyweight champion Francis Ngannou. Nevertheless, it seems that a potential match-up between him and ‘Thor’ could be on the cards.

The 33-year-old took to his social media to call out Bjornsson questioning if the Icelandic man possesses a glass jaw.

“I wonder if Thor could take a crashing right hand to that big jaw? Who would have Thor’s hammer? Would this mountain be too big to climb?”

Hafthor Bjornsson was quick to hit back at Fury, in an Instagram post where he stated he’s ready to go.

There is an obvious disparity in boxing knowledge and skill.  With Bjornsson only lacing up a pair of boxing gloves a hand full of times in the last few years, most notably where he was able to beat opposing strongman Eddie Hall in an exhibition event last March.

Despite this, the two 6ft 9in giants still leave a fair amount of interest on the table if the two were to step into the ring together. Howbeit, many boxing fans wouldn’t be surprised if Tyson Fury was to go in there and play with his food on the night.

Do you think Tyson Fury would be able to knockout Hafthor Bjornsson?