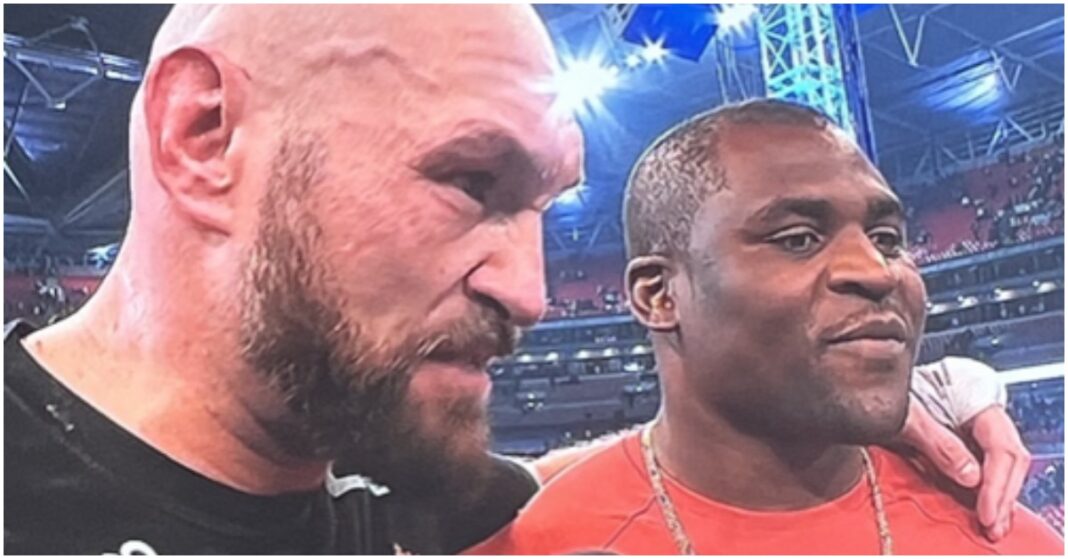 Tyson Fury and Francis Ngannou met in the middle of the ring to possibly promote a matchup between the two.

Ngannou is currently a free agent as he has not re-singed with the UFC after his last fight with Cyril Gane. The two met in the middle of the ring, following Fury’s knockout win over Dillian Whyte Saturday afternoon.

The two met in the middle of the ring to promote the possible fight and Nagnnou said it would be a hybrid type fight.

“It’s going to be a hybrid type fight with different type of rules. It’ll be in the ring with a bit of a mix up. It’ll be different.” Ngannou said.

Fury is uncertain what he may be doing in the future as well. His contract is up as well and there have been some possible rumors that he could go into the WWE or a possible matchup with Ngannou. Ngannou went on to say that the fight between himself and Fury would be the “Rumble in the Jungle 2”

Tyson Fury and Francis Ngannou should happen sometime in 2023 according to the Heavyweight champion.

A matchup between them would determine who the baddest man on the planet. Fury would have an advantage in a traditional boxing match, but depending on what the stipulations would be in their matchup could make a difference. If there is kicking involved, Ngannou would have a higher chance of winning the fight.

Would you like to see Fury and Ngannou face off in the ring?