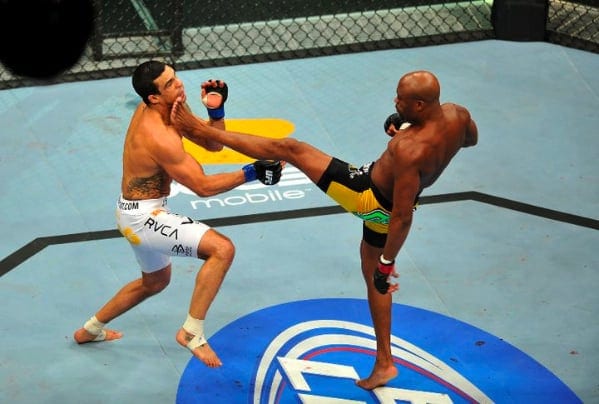 It’s no surprise to anyone that one of the sport’s greatest ever fighters, longtime former middleweight champion Anderson Silva is one of the two best fight-finishers in the history of the UFC.

During his time in the UFC so far, ‘The Spider’ has stopped 14 opponents in 17 victories, and delivered some of the most memorable KOs in the history of the sport.

A grandmaster of striking, a whopping 11 of those stoppage victories have come via punches, kicks or knees, and some of the most memorable include his front kick knockout of Vitor Belfort, his Muay Thai knees that permanently rearranged then-champion Rich Franklin’s nose, and the time he knocked out Forrest Griffin with a perfectly-timed jab.

Perhaps the reason that Silva was able to remain the 185-pound champ for so long and still holds the record for the most consecutive UFC wins in a row (16) is that he was also a major threat on the mat as Chael Sonnen can testify, the victim of a last-gasp triangle armbar finish in their legendary first encounter in 2010.