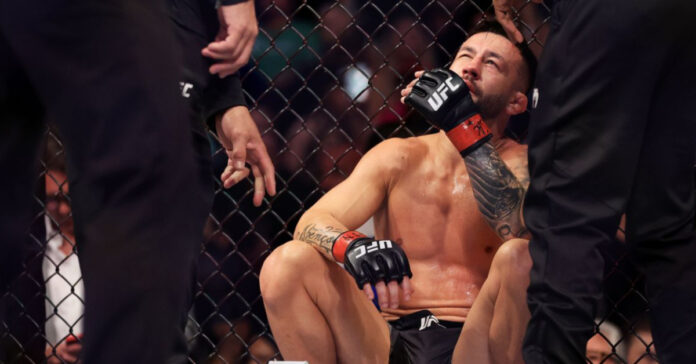 UFC bantamweight contender, Pedro Munhoz has criticized surging division challenger, Sean O’Malley for his handling of last weekend’s UFC 276 official ‘No Contest’ – after the Montana native landed a second round eye poke, with Munhoz suffering a corneal abrasion as a result.

Opening the main card of UFC 276 last weekend in Las Vegas, Nevada during International Fight Week, Munhoz’s matchup against O’Malley ended in an official ‘No Contest’ almost midway through the second frame, after the latter landed an inadvertent eye poke to Munhoz’s right eye, resulting in acute pain and an abrasion to his right cornea.

Earlier in the first round, Munhoz – who had taken the opening round on all three judges’ scorecards against O’Malley, also required a stoppage in the action after he found himself on the receiving end of another unintentional foul – this time a groin strike after a misplaced front kick to the body from O’Malley.

Following the official ‘No Contest’, O’Malley celebrated in the Octagon with his usual basketball-themed celebration, before embracing Munhoz, and raising his arm in victory during his reading of the official result.

Taking umbrage with O’Malley’s post-fight comments and how he handled the situation, Munhoz questioned why the Dana White’s Contender Series alum firstly embraced him before changing his proverbial tune.

“A lot of his actions after the fight, are things that I don’t think are right, based on my values,” Pedro Munhoz said of Sean O’Malley on The MMA Hour with Ariel Helwani. “Like, he came and aplogized, and then make a video on Tik Tok making fun of me. So you apologize to me for poking me – because he realized, he came up to me and said, ‘I didn’t mean to poke me in the eye.’… I tell my kids not to do it, you know, like you say one thing, and then you go make fun.”

“All his friends, all these guys texting me, talking about my wife, talking about my family, saying they’re gonna fight me,” Pedro Munhoz said. “And guess what, to them I say, you can come find me, Sunday, I’ll be at the pool all day, a few of them walked by, but they’re gangster computers, Ariel. …”