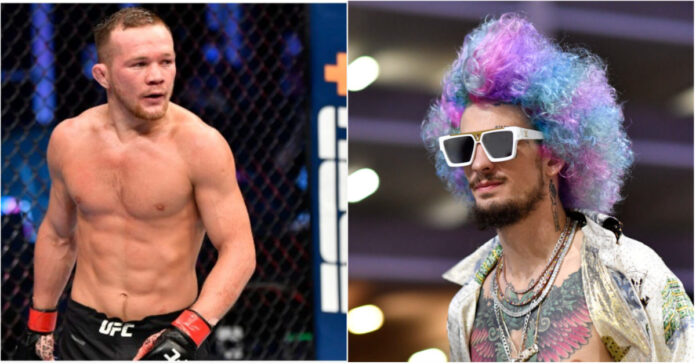 Petr Yan has issued a callout to one of the UFC bantamweight division’s hottest rising stars, “Suga” Sean O’Malley, telling him to either call him out or shut up about him.

O’Malley [15-1] has repeatedly claimed that everyone within the bantamweight division keeps ducking him, and that no one within said rankings will take up the mantle of fighting him. Speaking to ESPN (and quoted by MMAMania), O’Malley has said that:

“No one really above me ever calls me out,” O’Malley said. “Now Adrian Yanez is calling me out, which he should be. That’s what you should be [doing] — you call out the most popular guy in the division, one of the most popular guys in the UFC. Call him out. No one above me calls me out. I don’t know why. I don’t know if [they think] it’s a waste of time, they don’t want to make any easy paycheck. They can say whatever they want but I look at it as they know it’s a tough fight.”

“No Mercy” [16-3] is coming off a very narrow split decision loss to [now] UFC bantamweight champion Aljamain “Funkmaster” Sterling, and is clearly looking to take his frustrations out on shutting up the young upstart, who has become one of the most popular fighters in the entire company. Taking to Twitter, Yan had this to say:

“Hey pink poodle @SugaSeanMMA, if you win on Saturday and really wanna fight me I dare you to call me out and I will accept it. But if you just wanna make useless noise for hype, stop talking about me, coward”.

Whilst an extremely intriguing matchup, and one that would no doubt be a massive, massive fan favorite, it is, unfortunately, a conflict that is unlikely to happen anytime soon. Whilst a win over formidable opponent Pedro Munhoz would likely springboard the Suga show into the division’s top 10, Yan remains the number 1 bantamweight in the rankings. Whilst we have seen stranger things happen (cough cough Khamzat Chimaev), it seems like this feud might have to wait a while before we finally see it happen.

Would you like to see Petr Yan vs. Sean O’Malley?