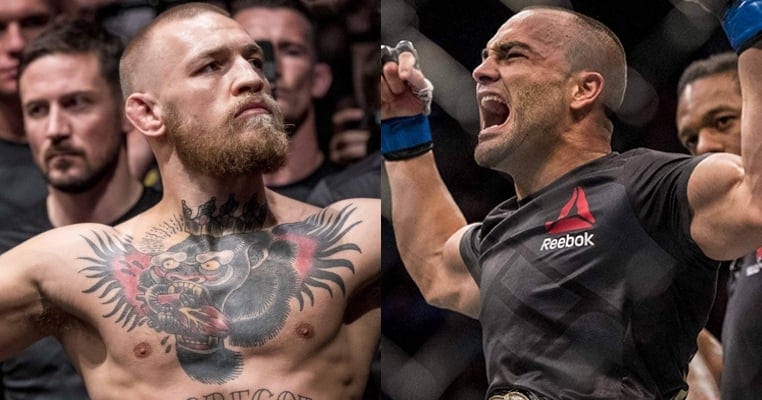 Conor McGregor‘s next fight is apparently close to being finalized, and not surprisingly, it’s one that could potentially bring him a second coveted UFC championship.

A report surfaced from Big Brand Boys stating sources close to the UFC informed them that McGregor vs. lightweight champion Eddie Alvarez is close to being signed for the main event of November 12’s UFC 205, the promotion’s first-ever event from New York City’s Madison Square Garden after MMA was finally legalized in the Big Apple this summer.

Featherweight champion McGregor was immediately scheduled to face then-lightweight champion Rafael dos Anjos in the main event of March’s UFC 196 after he won the featherweight title at UFC 194 in December 2015, but he infamously became embroiled in a high-profile rivalry with Nate Diaz when dos Anjos pulled out of the fight with a broken foot. The rest is history, as Diaz rebounded from a tough first round to batter and submit McGregor, paving the way for the Irish str’s two-day “retirement” before the rematch went down at August 20’s UFC 202.

McGregor won a closely contested majority decision in the fight, setting him up for a number of big-ticket fights, including a potential bout against returning former welterweight champ Georges St-Pierre. But the allure of seeing McGregor as a two-weight titleholder is something that’s simply too lucrative to pass up, and with ‘GSP’ unable to return until December’s UFC 206 from Toronto at the earliest due to USADA’s four-month testing window for retired fighters, this fight became increasingly obvious as the perfect headliner for the UFC’s Big Apple debut.

Hailing from nearby Philadelphia, Alvarez has New York ties with his respected boxing coach Mark Henry. McGregor’s homeland fans can fly to New York to watch him fight much easier than they can fly to Las Vegas, so this fight will be one with emotional ties involved in addition to the prestigious title on the line.

The UFC has yet to announce anything official on the bout, but one is reportedly coming soon. If so, McGregor vs. Alvarez would join Chris Weidman vs. Yoel Romero, Donald Cerrone vs. Kelvin Gastelum, Frankie Edgar vs. Jeremy Stephens, and Rashad Evans vs. Tim Kennedy on the historic, growing card.