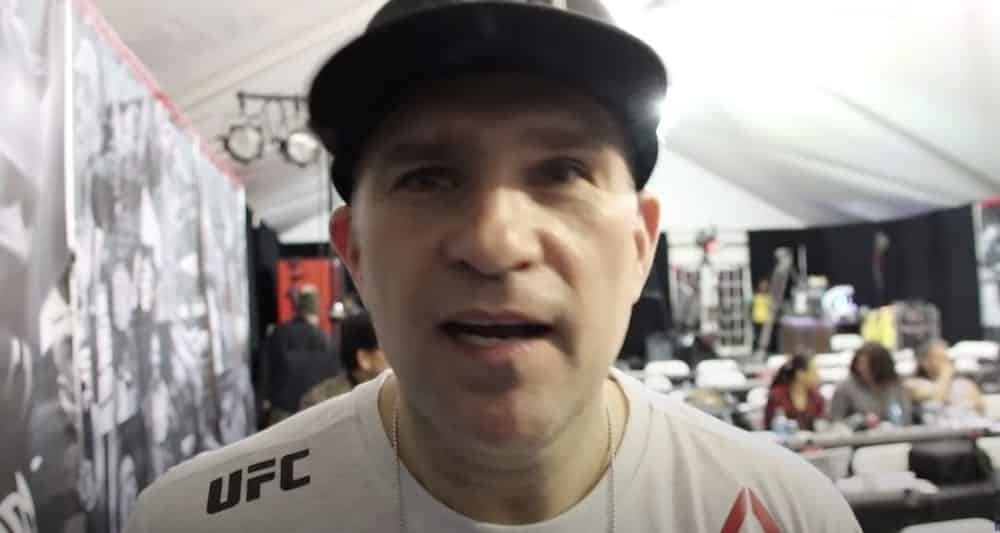 Mark Henry grew up in New Jersey and had a rather normal life. He participated in sports and particularly in boxing and wrestling.

Henry started boxing when he was 12 years old and would continue to train through his time in the army.

It was sort of just by chance that he started coaching in MMA. One day he was taking his son to wrestling practice at Elite Wrestling in New Jersey.

The coach and owner Steve Rivera knew that Henry had boxing experience and came to him with a proposition. Steve trained a fighter named Frankie Edgar that needed a boxing coach and asked if Mark could train him.

Henry at the time didn’t know anything about MMA, but still wanted to help Edgar. To help Frankie and be a better coach, Henry became totally immersed in MMA. Studying numerous videos and anything he could get his hands on.

As Frankie grew as a fighter, so did Mark Henry as a coach.

When Frankie began training under Ricardo Almeida, Mark Henry was brought in to be the striking coach. At RAJJ, he really came into his own as a kid and started gaining a stable of fighters.

This was thanks to the success Frankie had during the prime of his UFC career winning the UFC Lightweight Championship. He would go on to coach fighters like Eddie Alvarez, Edson Barboza, Claudia Gadelha, Corey Anderson, and Katlyn Chookagian.

During his coaching career, Henry has cornered in over 12 UFC title fights with 2 fighters to hold world titles. For the last decade, Henry has been considered one of the top ten MMA coaches and will continue producing top fighters.

One thing that sets Mark Henry apart from other coaches is he coaches top fighters, while running a pizza parlor. He owns Pino’s Pizzeria in Woodbridge, New Jersey with his wife Christina.

Everyday Henry’s day is scheduled around coaching his fighters and making pizzas. It’s very common for him to corner a fighter and then drive back home to open his restaurant.

In his 2 decades as a MMA coach, Mark Henry has coached numerous UFC fighters including 2 world champions. Here are a few of his most notable fighters.

Edgar began his MMA career with Henry from his first sanctioned fight until now. He was Henry’s first fighter and they have a very special bond.

Frankie would win his first 6 professional fights before getting the call to fight for the UFC in 2007. In his debut, he beat Tyson Griffin by decision and then won his next two against Mark Bocek and Spencer Fisher.

He would take his first professional loss in his first fight with Gray Maynard and then go on another winning streak. This streak would put him in line for a title fight against champion BJ Penn.

BJ would lose his title to the faster Edgar at UFC 112 and Frankie would win the rematch at UFC 118. This would set him up to have two epic wars with his rival Gray Maynard.

They would fight to a split draw in the 2nd match and  Edgar would win the 3rd fight by KO. Retaining his title for a 3rd time.

Frankie has had a storied career and he is now fighting at bantamweight looking to add another title before retiring.

Another fighter that Henry helped win a UFC title is veteran lightweight Eddie Alvarez. Eddie came to Henry later in his career after a stint with the Blackzillians.

This would be around the same time Eddie would enter the UFC. He had already won the Bellator title twice and was looking to add the UFC Lightweight Championship to his resume.

Alvarez would win his first two fights in the UFC and set himself up to fight then champion Rafael dos Anjos. Going into the fight, Eddie was the underdog, but would barrage the champ with strikes to win in the first round.

Making him currently the only fighter to hold both the Bellator and UFC Lightweight Championships. Alvarez is currently fighting in One FC looking to add another world title to his resume.

Chookiagian is one of the standout female fighters in the UFC strawweight division. Accumulating a UFC record of 9-4 and an overall record of 16-4.

Katlyn made her UFC debut in 2016 defeating Lauren Murphy by decision. Chookagian would lose her 2nds UFC fight, but go on a few streaks before fighting champion Valentina Shevchenko.

She currently holds two UFC records with the most fights in the women’s flyweight division and the most wins.  Chookiagian is currently ranked #2 in the division and will look to earn another title shot in the future. Attempting to add UFC champion to her resume.

After basically falling into coaching no one could have guessed what the future would hold for Mark Henry. In the 2 decades of coaching fighters, Mark Henry is considered among the best in the world.

He has cornered in countless main event fights and had two fighters become UFC champions. Not to mention numerous other fighters within the top ten of their divisions.

Along with continuing to run his pizza parlors, Mark Henry is still a very passionate MMA coach. He’ll continue to do both and try to help his fighters to more success and titles.