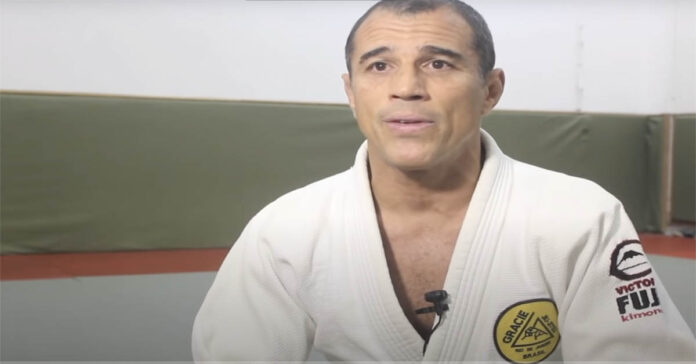 Royler Gracie is one of the greatest competitors in the history of Jiu Jitsu. He is the most accomplished athlete of all the members of the Gracie family.

Here is the complete story of the legendary Royler Gracie. Going through his childhood growing up learning Jiu Jitsu and how he became an all-time great.

Almost from the moment, Royler was born, he would spend a lot of his time on the mat learning Jiu Jitsu. His father, Helio Gracie, would teach him basic moves from the time he was two as a playful game.

Royler took his Jiu Jitsu training more seriously as he got older. Royler began attending his cousin Rolls Gracie’s classes at the Gracie Academy when he was eight.

Gracie claims that those times going to train with his cousin are some of his fondest memories. He would take a bus with his brother Royce and Rolker to Copacabana to train with their cousin.

They would stay in the academy from the time it opened until it closed. Training in the kid’s classes and then staying to watch their older relatives train.

Royler credits his older cousin and teacher, Rolls, for giving him the mindset to become a great competitor.

When Royler was seventeen, his coach and mentor, Rolls, tragically passed away in a hand gliding accident. He and the entire Gracie family were heartbroken by the loss of Rolls.

This would lead Royler to begin training with his older brother Rickson under the supervision of his father. Rickson is considered the best of the Gracie family, and Royler’s game transformed learning with his brother.

During his late teens and early twenties, Royler was already considered one of Jiu Jitsu’s best athletes. Gracie would go years without being defeated. Winning every single competition that he entered.

The first time he lost was by decision to De La Riva at the Copa Cantao competition in 1987. De La Riva used his patented De La Riva guard that no one had yet to stifle Royler for the win.

The young Gracie athlete was not at all deterred by the loss. He would then go on an even longer unbeaten streak after suffering this loss.

Royler Gracie: The King of the Featherweights

After Royler lost to De La Riva, nobody would beat him again for another ten years. He went on a legendary run of winning every major competition during that time period.

Beating everyone that was below 70 kg. This is how Royler would get dubbed the king of the featherweights.

In 1994, the very first Brasileiro Jiu Jitsu tournament took place. At the time, this was the biggest competition for Jiu Jitsu athletes in Brazil.

Royler would dominate his competition at 70 kilos and beat Alexandre Soca in the finals. Two years later, Royler would compete at the first BJJ World Championship by the CBJJ (Later the IBJJF).

In classic Royler fashion, he sliced through the competition. Submitting legends like Luis Amigo, Octavio Soca, and Vinicius “Draculino” Magalhaes.

He would meet future hall of famer Vitor Shaolin in the finals and beat him by an advantage. His ten-year unbeaten streak would be broken in the absolute division by Amaury Bitetti.

Royler would return to the 1998 BJJ world championship again as the favorite. Just like in the inaugural event, he showed why he was considered one of the best of the era.

He would roll on to win his second world title by beating the likes of Marcus Aurelio and Joao Roque. Also, beating Draculino for the second time in the finals to win gold.

In the absolute finals, for the first time in Royler’s career, he would be submitted by Mario Sperry by clock choke. Although, there was no shame in this loss as Sperry outweighed Royler by at least thirty pounds.

Not deterred by the loss, Royler would return to compete in his last world championship in 1999. He would make history by winning his fourth BJJ title by beating legends Leo Viera and Leo Santos.

In 1999, Royler competed in the second ADCC tournament in the -66 kg division. Royler was more known for training in the Gi but proved just as effective out of the Gi.

He would have a dominant performance beating his first three opponents and winning in the finals by leglock.

Gracie would return to compete in ADCC in 2000 and defend his title. His performance at that year’s tournament would top his performance from the previous year. Handily beating all four of his opponents to repeat as ADCC champion.

Then in 2001, Royler would accomplish what no one had yet accomplished in the history of ADCC. He would win all four matches to win his historic third ADCC title in a row.

While winning numerous world titles in grappling, Royler also found time to compete in MMA. Although, he wasn’t as successful in this sport as in grappling.

In his MMA career, Royler went 5-5-1. Nearly all but three of his fights took place in Japan. He most notably fought Kazushi Sakuraba in Pride, a controversial loss where Royler didn’t submit.

Royler’s last ADCC appearance would take place in 2003 in Sao Paulo. He was expected to win his fourth ADCC title in a row, but it wouldn’t turn out that way.

Gracie would meet a young student of Jean Jacques Machado in the quarter-finals named Eddie Bravo. Eddie would stun the Brazilian crowd by submitting the legendary Royler with a triangle choke.

Royler would bounce back from the loss and win the bronze medal match. Announcing his retirement from grappling after nearly 30 years of competing.

In 2014, Royler would come out of retirement to have a rematch with Eddie Bravo at Metamoris 3. Grappling fans had been clamoring to see this rematch for years, and they finally got it.

The two would battle for ten minutes, with Bravo nearly getting a submission, but Royler refused to tap. Their match would end in a draw, and both would officially retire from competition after the match.

What made Royler Gracie such a special athlete was his style. He had a complete game and could attack off his back and on top. His wrestling ability is also one of the best among the Gracie family.

This complete style enables Royler to win 7 world titles in grappling. The reason why he earned the nickname the king of the featherweights.

Royler Become a US Citizen and an 8th Degree Promotion

In 2010, Royler decided that he needed a change of scenery. He would step down as head instructor at Gracie Humaita in Rio de Janeiro and move to the US.

Royler decided to settle in San Diego, California, and open another Gracie Humaita school in the city. Five years later, Royler would finish his immigration process and become an official US citizen.

Around the same time, Royler earned his citizenship, his older brother Rorion would promote him to the 8th degree Jiu Jitsu belt. A huge ceremony was held in Royler’s academy, where all his close family and students were in attendance.

The Legacy of Royler Gracie

There is no debate that Royler Gracie is one of the greatest Jiu Jitsu athletes of all time. Winning seven major world championships in grappling in both Gi and No-Gi.

He went over a decade without getting beaten and was one submitted just twice in a 30+ year career. Royler was not only an incredible athlete, but he’s also an incredible teacher and ambassador for Jiu Jitsu.

The king of the featherweights did it all and set a standard of excellence that will be incredibly hard to duplicate.