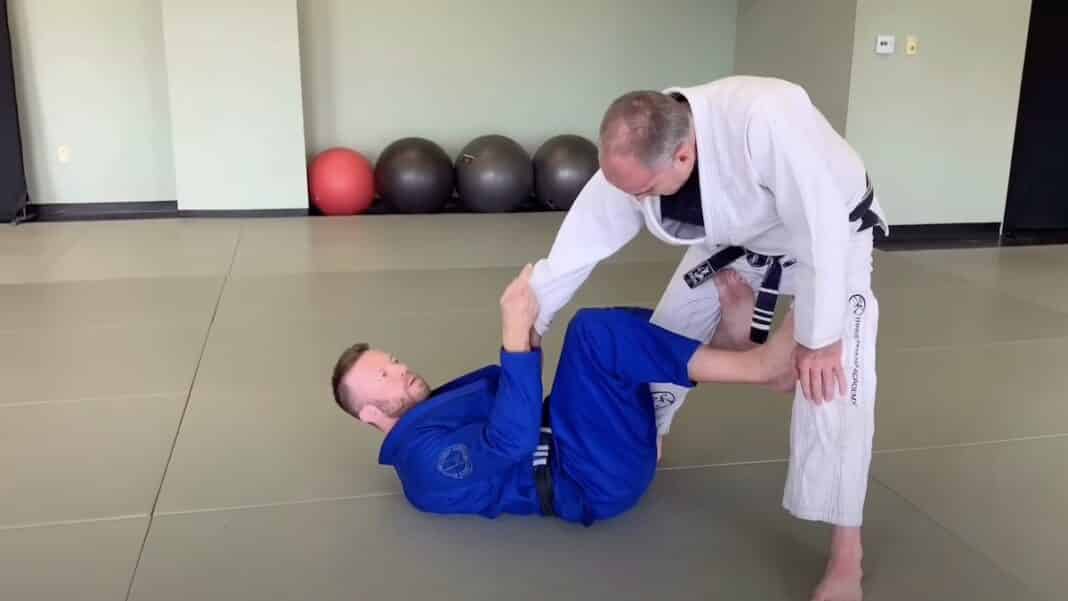 If you practice Jiu Jitsu, one of the guards you must know is the De La Riva guard. This guard revolutionized the open guard game in Jiu Jitsu.

It provides great control over your opponent, while having numerous attacks available. Numerous sweeps and submissions that you can hit whether you’re training in the Gi, No-Gi, or MMA.

Here is almost everything you need to know about the De La Riva guard. We’ll take you through how the guard’s creator came up with his guard, and detail numerous techniques from DLR. Then at the end, look through are list of tips for playing De La Riva to sharpen up your guard game.

The De La Riva guard was named after the man that created it, Ricardo De La Riva. Ricardo is a black belt that trained under the late great Carlson Gracie Sr.

He trained with some of the best grapplers ever that were known for their heavy pressure guard passing. De La Riva being a little smaller than his more experienced teammates had to come up with a new strategy.

Since he couldn’t keep his teammates in closed guard, he would have to start developing his own type of guard. Using the physical attributes he had of being small and flexible to his advantage.

What he created would be known as the De La Riva guard. One of the guards ever created that revolutionized Jiu Jitsu. His guard would quickly take off in popularity and today is taught in every Jiu Jitsu school.

His guard Ricardo created is still evolving til this day.

How does the DLR guard work?

The DLR guard is a very simple guard, yet provides phenomenal control even against the strongest opponents. It all starts with a leg hook behind your opponent’s leg and holding their ankle.

These two simple grips can keep even the strongest opponent at bay for a moment as you plan your next move. Along with these grips, you have a variety of things you can do with your free hand and foot.

You can do anything from placing your foot on your opponent’s knee, hip, or even their bicep for spider control. The options are nearly endless with DLR guard, which is why it has become a staple within Jiu Jitsu.

Here is the first ever sweep invented from the De La Riva guard. It starts when your opponent is in combat base with their knee up.

Then you’re going to get your De La Riva guard hook a little deeper and hook it against your opponent’s far thigh. From there, you start the sweep by pulling their sleeve as you kick their knee to take their base away.

As they fall, continue pulling and turning your opponent’s sleeve as a guide to take you on top to side-control.

Here is a basic De La Riva guard sweep option for when your opponent is standing over you. Go into the DLR position and grab a collar grip with your free hand and your other foot on their hip.

You’re going to start the set up by using your foot on their hip to push your opponent away. This is to get a reaction out of them to push back into you.

As they come forward, scoot your hips and kick your opponent over your body making them front roll. Finishing the roll with you on top to complete the sweep. https://www.youtube.com/watch?v=ylXALtSRdxk&t=3s&ab_channel=MMALeech

Side Sweep from DLR guard

This sweep starts when your opponent places their hands on your knees and is about to attempt a pressure pass. They try to take your foot off of their hip by doing a back step.

Doing this puts them heavy on their front foot and shoulder. So what you’re going to do is grab a collar grip and pull your opponent in.

At the same time, you turn on your side and kick the foot on their hip like a scissor sweep. Making them fall to the side.

Another classic move from DLR is the back take. Start your setup by grabbing a cross sleeve grip on your opponent.

Keep your opponent in place by pulling down on the pant grip as pull the sleeve grip toward your head. Now, you’re going to take your foot off of your opponent’s and bring it around their leg. Hooking behind your opponent’s knee.

To complete the sweep by grabbing your opponent’s pants/belt and kick them away with your hooks as you pull them. These two motions together make your opponent fall on their butt and once they fall get your hooks in.

A triangle from De La Riva guard as a counter when your opponent defends your side sweep. Start by going through the steps of the side swee by grabbing a collar grip and pull your opponent to the sad.

Most will defend this sweep by basing out, putting both of their hands on the mat. When they do this, quickly take your foot off their hip and lift your hips to lock in the triangle.

Once you lock it in, turn to the side and pull their head down as you put on the pressure.

You can get a slick arm bar off a balloon sweep attempt from the De La Riva guard. When your opponent is standing, grab a grip on their sleeve as you fall down into DLR guard.

Then you do the basic push and pull method to get your opponent to come forward. Now from here, you can either fake the sweep and go right to the arm bar or your opponent defends.

Either way as your opponent comes forward, you take your De La Riva guard hook out and turn your hips. As you turn your hips, you’re going to pull their arm across your body and take the armbar.

Multiple time BJJ champ Caio Terra is famous for an ankle lock he does from De La Riva guard. Here are the steps for this move.

Make sure to hook it around with no space or your opponent can slip their foot out. Also as your hand comes around grab your collar or place your hand on your chest.

Next, take your foot off of your opponent’s hip and hook it behind the same side knee, Then grab their far ankle with your free hand and sweep them down.

Once they’re on the ground, turn onto your De La Riva guard hook side and lock on the pressure (subtitles on for this video).