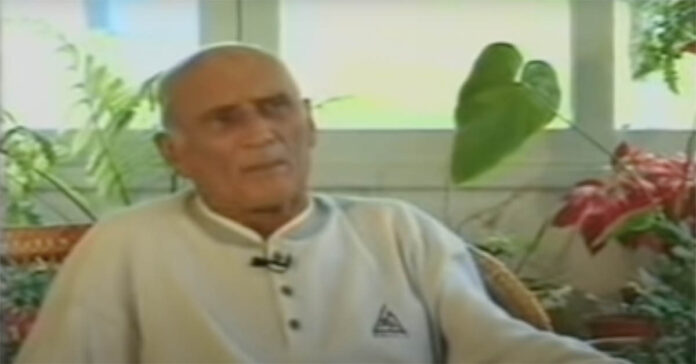 Master Helio Gracie is one of the people responsible for developing the martial art of Brazilian Jiu Jitsu. He dedicated his life to the martial art he created and lived to see it become internationally practiced.

Here is the story of the co-creator of Brazilian Jiu Jitsu, Master Helio Gracie. We’ll start with how Helio’s brother, Carlos, showed him Judo techniques and how they developed BJJ. Then we’ll get into how Helio and the Gracie family fought to prove the martial art’s legitimacy.

Helio Gracie grew up in Belem, Brazil, and was the youngest son of Gastao Gracie. A wealthy businessman and politician who was the son of Scottish immigrants.

His brother Carlos Gracie Sr. began taking Judo classes from Mitsuyo Maeda, who befriended their father. Carlos would show Helio and his brothers the techniques Maeda showed him in class.

The Gracie would finally go through some financial trouble that forced them to move to Rio de Janeiro. While in Rio, Carlos would continue practicing Judo with his brothers.

Carlos would continue training Judo with his other brothers, George, Gastao Jr, and Oswaldo. He would also allow their youngest brother Helio to train, but only techniques and no sparring. Afraid that his brother would get hurt.

Helio would begin sparring with his other brothers in secret, along with training techniques. When Carlos saw Helio didn’t get hurt and was improving, he permitted him to continue sparring.

He would practice catch wrestling under Orlando Americo “Dudu” da Silva. An innovator in wrestling within the country that would fight Helio and his brother George later on.

Gracie would also learn under Judokas Sumiyuki Kotani and Chugo Sato for a short time. He was said to have actually held a 6th-degree black belt in Judo, according to Masahiko Kimura in 1951.

Helio began to notice that the techniques of Judo were effective but sometimes hard for him to execute. He began tweaking the ground techniques or “newaza” that his brother learned from Maeda.

Carlos and Helio would begin developing their own style, where a smaller person could fight off their back. Using leverage and timing to be able to sweep and submit larger opponents.

The brothers felt confident in what they were developing and would soon put it to the test.

Helio would begin his fighting career at the young age of 18 in 1932. For his first Vale Tudo match, his brother Carlos set him up to fight a boxer named Antonio Portugal.

The young Helio would submit the boxer in just forty seconds of the bout. Spectators were quite impressed by the young grapplers fighting skills.

His next bout would take place that same year against a Judoka named Takashi Namiki. They would fight to a draw after neither Helio nor Namiki could get an advantage over the other.

For his last bout of 1932, Helio would face a world champion wrestler named Frank Ebert. The wrestler was said to have outweighed Helio by at least 50 lbs.

Gracie and Ebert would fight for nearly two hours until the police stepped in and stopped the fight. Citing that they legally couldn’t let the fight continue, which resulted in the fight being a draw.

Two years later, Gracie would step back into the ring to fight a Polish catch wrestler and strongman named Wladek Zbyszko. The two would fight for twenty minutes where Zbyszko stayed in Gracie’s guard for the entire bout.

After four fights, Gracie had still not been defeated in a fight. In the same year after fighting Zbyszko, would fight a Japanese Judo champion named Taro Miyake. Submitting the Judoka by cross choke.

A year later, Gracie would challenge his former instructor Dudu Silva. This fight would be Helio’s one and only win by strikes.  He would hit Silva with a kick to the spleen, which forced him to quit.

His next pair matches would be heated grudge matches against two champion Judokas. The first would be against Yassuiti Ono, who had previously beaten Helio’s brother George.

Ono would throw Gracie 32 times in their bout but never quit. Attempted arm locks and chokes of his own before time in the bout expired. Resulting in a draw.

Shortly after this bout, Helio would face Ono’s training partner named Takeo Yano. Another bout that ended in a draw.

Gracie would then meet a Japanese fighter named Massagoichi, who was billed as a sumo and Judo black belt. Gracie’s previous opponent Ono disputed that Massagoichi ever trained Judo.

Helio would win the bout by armbar, but the Brazilian press heavily criticized this bout and called it a farce. The Brazilian Federation of Pugilism was so upset with Massagoichi’s performance that they suspended him.

This would lead to Gracie fighting Ono in a rematch that would once again end in a draw. His last match of the 1930s would be a win by arm lock against boxer/wrestler Erwin Klausner.

After this bout, Helio would announce his first retirement from fighting.

Helio Gracie Comes Out of Retirement

Helio’s first retirement would last thirteen years after being challenged by a young fighter named Landulfo Caribe. Landulfo was also a grappler that traveled from Bahia to Rio to challenge Gracie.

He would accept the young Caribe’s challenge and beat him in just four minutes of his comeback fight. Passing Caribe’s guard and locking in a cross choke from the mount.

Shortly after this bout, Gracie would face another opponent named Azevedo Maia. A match that would result in another quick win for Gracie by cross choke.

The Helio Gracie vs Kimura Match

In 1951, the legendary Judoka Masahiko Kimura was doing a Judo tour through South America. The company Kimura was working for booked multiple stops within Brazil.

When Kimura arrived in Rio de Janeiro, he was immediately challenged by Helio Gracie. Kimura would refuse the challenge, citing that he didn’t believe Helio or his family were credible grapplers.

Helio and Carlos would continue to harass the Judoka with their challenges. The Japanese champion then made an offer to Helio. He would accept his challenge, but only if he could beat one of his team members.

Gracie accepted, which set up a match against Yukio Kato.

The first match between Helio and Kato would take place on September 6, 1951. They would fight for hours, but neither fighter could finish the fight.

Helio would demand an immediate rematch, which was accepted, and took place on September 29th. This time, Helio would get the better of the Judoka and win by a choke.

Kimura would then grant Helio his wish.

The historical match between Helio Gracie and Masahiko Kimura occurred on October 22, 1951. According to the Gracie’s, Kimura said he would consider it a loss if he didn’t beat Helio in 3 minutes. There is no account of that quote ever being said by Kimura.

Many older Gracie members claimed that Kimura had an 80 lb(36 kg) advantage over Helio. It was more like 20 lbs(9 kg), but members of the Gracie family have been to embellish stories.

This match was recorded, and you can see that Kimura dominated every moment of their fight. Throwing around the smaller Gracie with ease and controlling him on the ground.

Kimura would lock in reverse ude-garami and Helio refused to submit. Resulting in Kimura breaking his arm and winning the match.

BJJ practitioners have renamed the submission “the kimura” out of respect for the Judoka.

After the loss to Kimura, Helio would retire from fighting a second time to focus his energy on teaching. This would lead to Helio and his brother Carlos opening their Gracie Jiu-Jitsu school in 1952.

They would call their school the “Academia Gracie”(Gracie Academy). The school would later be renamed Gracie Humaita years later when the school became an affiliation.

From the year the academy opened in 1952, Helio would teach there for the next 57 years until his death.

Just four years after his second retirement, Helio would be coaxed out of retirement. A former student named Valdemar Santana was 16 years younger and greatly outweighed his opponent.

Helio would accept the challenge, and the fight would take place in 1955. According to spectators, the fight went nearly four hours, with both men battered and beaten.

Gracie being older at this time, would get tired first. Leading to Santana knocking him out with a vicious soccer kick. After a second loss, Gracie would retire one more time.

Heróis do Ringue(Heroes of the Ring)

Decades before the Ultimate Fighting Championship was established, Helio created his own early version Herois do Ringue (Heroes of the Ring). The very first no-holds-barred fighting event ever put on television in Brazil in 1960.

This event was an early advertisement for Gracie Jiu-Jitsu, much like the UFC would be in the future. Carlson Gracie, who was the family’s best fighter during the era, would fight in the main event.

Herois do Ringue would only air one time on Brazilian television before being abruptly canceled by the TV station. Citing that it was far too violent to show the general public.

The particular moment that would lead to this decision was when future UFC ref Joao Alberto Barreto broke his opponent’s arm.

Twelve years after losing to Santana, Helio would once again be challenged to a match. This time, at 54 years old, the leader of the Gracie family would come out of retirement one more time.

He would face a younger grappler named Valdomiro dos Santos Ferreira. Helio would end his fighting career 35 years after debuting with a submission win.

In Helio Gracie’s life, he had been married twice. The first was to Margarida Gracie, which lasted fifty years until she passed away. His second marriage was to a woman named Vera Gracie, who he married in 1992.

Gracie would have nine children in total between his two wives and another woman named Isabel “Belinha” Soares.

In the early 1990s, Helio Gracie’s son Rorion would co-create the Ultimate Fighting Championship. A no-holds-barred tournament that was created as an advertisement for Gracie Jiu-Jitsu.

The family would choose Royce Gracie to represent the family in the event. Helio Gracie would corner and coach Royce in UFC 1 and UFC 2, which Royce easily won.

On January 29th,2009, Helio Gracie took his final breath and passed away after suffering from an illness. He lived to be 95 years old. Before Helio became ill, he was still teaching and training every day well into his nineties.

The Legacy of Helio Gracie

There isn’t much to say about Grandmaster Helio Gracie. Without Helio, modern BJJ or MMA may not have existed, and definitely not the UFC.

If you love modern-day MMA or grappling, one of the people you can thank is Grandmaster Helio Gracie.