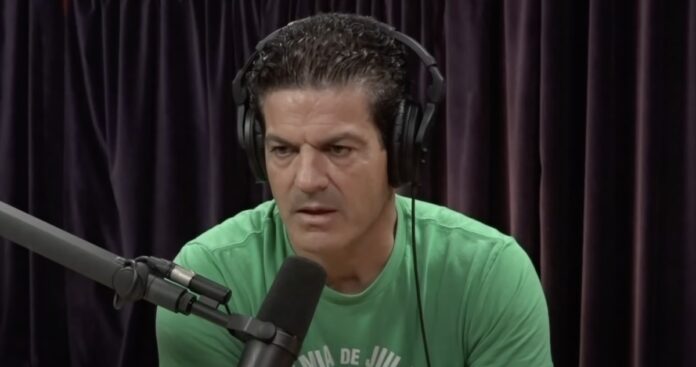 Jean Jacques Machado is one of the most beloved members of the Jiu Jitsu world. One of the five Machado brothers that helped establish and grow BJJ in the US.

Here is everything you need to know about the legendary Jean Jacques Machado. Going over how he got started learning Jiu Jitsu with his brothers and how they opened their first US academy.

Jean Jacques is the fourth born of his five brothers that all became champions in BJJ. His family is related to the Gracie family through his Aunt Lair, who is Carlos Gracie Sr.’s daughter.

He had a close bond with his cousin that led Carlos Jr. making Jean Jacques an assistant coach. Along with Carlos Jr, Jean Jacques helped teach other future BJJ legends.

Machado and his brother found success early on in BJJ competition. During the 1980s, Jean Jacques would win the biggest BJJ tournaments of the era at the lower ranks.

Winning the Rio de Janeiro state championships multiple times from blue belt to brown belt. His hard work would pay off as his cousin, Carlos Jr. would promote him to black belt.

Jean Jacques Machado Moves to the US

After being promoted to black belt, Jean would join his brother Rigan Machado in California. Rigan was the first of his brothers to move to the US and try to help build a Jiu Jitsu scene.

He initially wanted to open a Gracie Jiu Jitsu affiliate school, but Rorion Gracie threatened to sue him. Soon enough, all five Machado brothers would move to the US and teach Jiu Jitsu out of their home.

Jean Jacques and His Brothers Teach the Gringos

When the Machado brothers began teaching out of their home in the US, they received criticism from Brazilian practitioners. Like when Chinese Kung Fu masters had problems with instructors teaching westerners, Brazilians didn’t like “gringos” learning Jiu Jitsu.

They felt that Jiu Jitsu was a strictly Brazilian martial art that only Brazilians should learn. The Machado brothers received a lot of flak for teaching gringos back in Brazil. But they ignored this criticism and continued to teach American students.

There is one famous martial artist that played a big role in establishing the Machado brothers first BJJ academy. That person was Chuck Norris.

Jean Jacques’ brother Roger had actually befriended Chuck Norris years before. Taking part in a Jiu Jitsu demonstration at a self-defense convention put on by Norris in Vegas.

Once Roger arrived in the US, he got in contact with his old friend Chuck Norris. Inviting him to his brother’s Redondo Beach home to come train with them.

The brothers were kind of taking a back when Roger walked through the door with Chuck Norris. He was in between making movies, so he would spend all day training with the Machados.

Chuck Norris developed a close bond with all of the Machado brothers. So much so that he had a huge surprise for them. He drove the brothers to a shopping center on Ventura Blvd and showed them a unit filled with Jiu Jitsu mats.

Norris was the owner of the shopping center and told the brothers that this was their new academy. Without Chuck Norris, the Machado brothers may have not helped spread Jiu Jitsu the way they did.

Jean Jacques Machado’s Competition Career in the US

Even though Jean Jacques was helping his brothers build their academy, he still found time to compete. Traveling back to Brazil on occasion to compete in the Rio de Janeiro state and Brazilian National BJJ Championships.

He won the cruiserweight championships for eleven years running from 1982 to 1992. Machado stopped at eleven to stay in the US and focus on his academy.

Due to BJJ still being very young in the US, there were no competitions running when Jean Jacques moved there. This would force Machado and some of their brothers to try their hands at Sambo.

There was a more established Sambo scene in the US at the time and the brothers wanted to continue competing. It wasn’t Jiu Jitsu, but the brothers(including Jean Jacques) would still exel at this form of grappling.

Jean Jacques would win a National Sambo championship and a Pan Am Championship. This entry into Sambo would help expand his game. Exposing him to new techniques and submissions that he added to his game.

As the 1990s rolled on, Jean Jacques would get more opportunities to compete in BJJ. In 1995, a now defunct organization started the inaugural Brazilian Jiu-Jitsu American Championships.

Machado would easily beat the competition and win the organization’s first national championship. He would win this title three more times in a row from 1996 to 1998. Jean would also compete in a large grappling event put on in Japan in 1995, which he also won.

Machado did compete in an MMA event in 1998. It was in the Vale Tudo Japan promotion against UFC veteran Frank Trigg early in his career.

Jean Jacques suffered a cut from a knee going in for a single leg takedown. His corner would stop the fight after seeing the cut.

Machado would participate in the second ever ADCC tournament held in 1999. He would take home by beating Japanese MMA legends Hayato “Mach” Sakurai and Caol Uno.

Jean would return in 2000 to defend his title and would be his first three opponents, which included  Leo Veira. But Machado’s distant relative Renzo Gracie would dethrone Jean Jacques by an advantage.

In 2001, Machado would return to ADCC and lose in the quarterfinals by penalty to Matt Serra. But he would bounce back in the absolute division and earn a silver medal.

He made his last appearance at ADCC in 2005, where he lost in the opening round to Dean Lister.

Machado suffers from a birth defect called amniotic band syndrome. He was born with only a thumb and little finger on his left hand.

This disability would force Jean to make improvisations to his Jiu Jitsu game. Since he couldn’t take Gi grips, he began using wrestling hand locks and framing.

Jean Jacques was also known for his aggressive style. He would also be attacking and never let his opponent breathe. Sweeping them from guard and constantly looking for the submission.

Particularly variations of the butterfly sweep before taking his opponent’s back to lock in an RNC.

His style was one of the most effective of his era, which helped him win numerous championships in grappling.

Machado has been teaching Jiu Jitsu since the late 1980s. This long tenure as an instructor has led to Jean having tens of thousands of BJJ students. Including a wide variety of MMA fighters and celebrities.

Two of his most notable and famous students would have to be Joe Rogan and Eddie Bravo. The two would meet each other training at Machado’s school in the late 1990s.

Both would go on to become black belts under Machado and they always give the utmost praise to him. Eddie Bravo gives credit to Jean Jacques for allowing him to be creative and come up with the 10th Planet system.

The Legacy of Jean Jacques Machado

Jean Jacques Machado is one of the most respected members of the BJJ and grappling community. Machado’s dedication to the martial art has led to him earning his 7th degree coral belt.

His resume speaks for himself and anyone who knows Master Jean Jacques is one of the best people they ever met. He has done so much for the martial arts world and we can’t thank him enough for what he’s done.