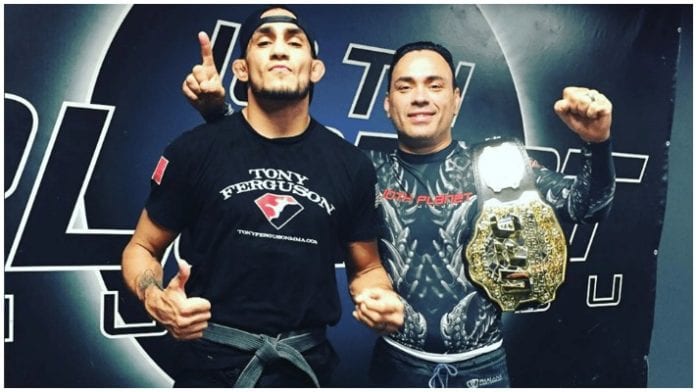 Eddie Bravo was the son of Mexican immigrant parents that moved to California and Eddie was born in Santa Ana. Growing up Eddie was into three things. American football, music, and martial arts.

While in high school, he joined the wrestling team and also tried out for his high school football team. Then after high school, Bravo moved to Hollywood to pursue a music career.

While he was training to make a music career happen, he discovered Royce Gracie and the Ultimate Fighting Championship. He immediately wanted to learn the art of Brazilian Jiu Jitsu.

Before finding a Jiu Jitsu academy, he tried karate for a short time, then trained at Jeet Kune Do school. Around 1996, he found Jean Jaques Machado’s academy and started his Jiu Jitsu journey.

When Eddie Bravo was around a blue belt, he began to create his own style of Jiu Jitsu. Coming up with submissions and one in particular he is known for called “the twister.”

At purple belt, he began developing his own guard that he called “the rubber guard.” He said that he developed the guard for MMA to control your opponent to prevent them from striking and land submissions.

After years of developing his own style, Eddie was able to qualify for the 2003 ADCC championships in Brazil. At brown belt it was quite an impressive feat.

Bravo would shock the world at the competition submitting Royler Gracie. One of the greatest Jiu Jitsu athletes of all time.

Eddie would come up short in the semi finals, but upon returning, Machado awarded Eddie with his black belt. He was then ready to go out on his own and open his own gym.

After beating Royler Gracie at ADCC and receiving his black belt, Eddie Bravo would go on to open 10th Planet Jiu Jitsu. A strictly No-Gi Jiu Jitsu school based on Eddie’s style.

He received some backlash from BJJ traditionalists, but was able to persevere and carve out his own niche. In the almost 19 years of 10th Planet’s existence, there are now schools all over the world.

Eddie has given many black belts and helped train some of the best Jiu Jitsu athletes and some MMA fighters.

Eddie Bravo had done fight analysis and production for the UFC in the early 2000s. This was thanks to his friendship with UFC commentator Joe Rogan.

Eddie Bravo and Joe have been friends since the mid 90s, where they both trained at Jean Jaques Machado’s school. Rogan knew that Eddie was an expert at the sport and always pushed for the UFC to work with Bravo.

Through Eddie’s connection with Joe and the UFC it has offered him many opportunities. Not only for Eddie professionally, but also for his school and as an MMA coach.

Eddie has had the chance to work with some of the world’s best fighters and show them his techniques. Through the UFC Fight Pass, Eddie was given a platform to show his Jiu Jitsu promotion, the Eddie Bravo Invitational(EBI). One of the first and most successful professional Jiu Jitsu shows.

While Eddie Bravo is more known for training some of the best Jiu Jitsu athletes in the world. He has also helped train some of the world’s best fighters. Some of the notable fighters include Tony Ferguson, Vinny Magalhaes, Kelvin Gastellum, and Shinya Aoki.

While Bravo isn’t one of Aoki’s trainers or gave him his black belt, he did help inspire Aoki. Shinya is one of the best grapplers in MMA and has been for over a decade.

He began developing Bravo’s rubber guard into his game, as well as sported flashy spats in fights. Using variations of different 10th Planet techniques in his Jiu Jitsu to submit numerous opponents.

Gastelum is frequently in the mix for the UFC middleweight title and one of the more known 10th planet black belts.

Vinny Magalhaes is probably one of Eddie’s most successful athletes. Magalhães has won 2 Jiu Jitsu world championships including the ADCC in 2011.

He is a TUF alum and has had two stints in the UFC. Many also know Magalhaes from being part of a joke with Renato Laranja. A character of Eddie’s student Rhasson Orange, who is an actor.

Vinny currently fights for the PFL MMA promotion and routinely has Bravo in his corner.

Tony Ferguson is probably the most known MMA fighter that Bravo coaches. He has been with the UFC for 10 years and has been with Bravo for almost his entire career.

You can see in many of Ferguson’s fights that he uses various 10th Planet techniques within his fights. Techniques that help lead him to being undefeated from 2013-2019 and winning the UFC Lightweight Championship.

Ferguson has been a huge ambassador for Eddie’s 10th Planet System and is also a black belt under Eddie. After he retires from fighting, Tony has been on record that he wants to open his own 10th Planet school.

At 50 years old and over 3 decades in BJJ and MMA, Eddie Bravo has done a lot for martial arts. He is a highly decorated BJJ/MMA coach that has helped share Jiu Jitsu and MMA throughout the world.

He is continuing promoting both sports through his newest venture Combat Jiu Jitsu. A mix of MMA and Jiu Jitsu, where open hand slaps are allowed on the ground.