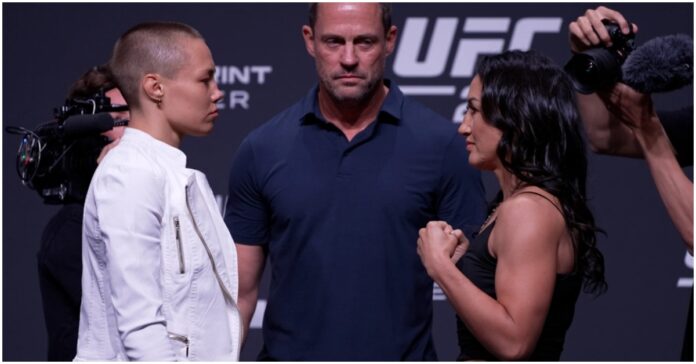 In the co-main of the upcoming UFC 274, strawweight champion Rose Namajunas will take on Carla Esparza, in a rematch eight years in the making.

When Namajunas and Esparza fight fought, in the Ultimate Fighter season 20 finale, it was Esparza who walked away with her hand raised. ‘The Cookie Monster’ was able to lock up a rear-naked choke in round three, forcing the tap.

However, since then, Rose Namajunas has teamed up with Trevor Wittman, immensely improving her game to the point where she was able to capture, and defend, the UFC strawweight title. Esparza has also continued to improve, and how sits on a five-fight winning streak.

Rose Namajunas goes into this fight as a heavy betting favorite, with the bookies clearly backing her to avenge her early loss to Esparza. Let’s see what the LowKickMMA staff have to say:

I feel that this fight has a relatively simple dynamic to it, in that for Esparza to win, she must be able to implement her dangerous high-level wrestling game. Failure to do so will be catastrophic for the ‘Cookie Monster.’ Namajunas is an extremely well-rounded fighter, with lethal kickboxing that will likely light Espaza up if the fight remains on the feet. She also demonstrated her ability to deal with strong wrestlers in her most recent rematch with Weili Zhang. If Esparza cannot get her game going early, one has to think that Namajunas will run away with the fight, and as a result, I have to take ‘Thug’ Rose for this one.

By now, we’re all well aware of the incredible story of Rose Namajunas to not just rise to strawweight supremacy – but, to do it twice in a record-setting fashion. However, the story shared by co-headline feature, Carla Esparza matches Namajunas’ tenfold. The first Invicta FC and UFC strawweight champion, Torrance native, Esparza is a trailblazer in every sense of the word. The first champion in one of the toughest divisions in the sport. Toppled by a common opponent, Joanna Jedrzejczyk soon after her UFC reign began, Esparza’s re-emergence as a title challenger, once again, is nothing short of commendable. It must also be said first and foremost, both Namajunas and Esparza have come on leaps and bounds since their first matchup back in 2014 in an inaugural title offing. Namajunas has rounded out her game splendidly, under the watchful eye of ONX Labs technician, Trevor Wittman, while Esparza has continued to stack high a résumé containing notable contenders under the guidance of Colin Oyama on the west coast. Namajunas has herself showcased those ever-developed skills in her pair of successes against Jedrzejczyk, and Zhang Weili – the latter of which last November most notably. Dynamism and creativity from Rose gets her my nod in this old-school strawweight stylistic sequel.

A classic striker vs. Grappler matchup. Esparaza will have the mental edge I feel leading into this one, having already beaten Rose in the past. However, that was a long time ago, and Rose’s game has evolved massively since then. It’s worth mentioning that this was a fight Rose campaigned to get back to avenge her loss, highlighting her competitive spirit. I expect Esparza to have a successful start to the fight, utilizing her wrestling and landing takedowns frequently. As the fight plays into the later rounds, I expect Esparza’s gas tank to run out of fuel due to the constant wrestling allowing Rose to open up her striking more and put it on Esparza. As Rose has shown, she can shut anybody’s lights out in these big fights. I’m going with Rose by knockout in the late rounds after a strong start by Esparza.

I see Rose winning this one quite comfortably. Although Esparza can pressure her and bring something new to the table with her wrestling, Rose is just too well-rounded, she’s good off her back, can’t be held down, and is a threat with her submission. Maybe Esparza does something unexpected but I am going with Rose on this one.

I got ‘Thug’ Rose winning this one. She’s on another level this time around, but I do think it will be a closer fight than many believe. I don’t think Esparza will be able to match Namajunas’s striking, but if she can get the fight to the ground we got a fight on our hands. On the mat with Esparza is the last thing Namajunas wants in this fight. This fight will most likely go the distance with Namjunas’s hand being raised at the end.

Although Carla Esparza drew first blood against Rosa Namajunas in their Ultimate Fighter finale, I don’t see anything past Bruce Buffer screaming out “AND STILL” the only thing in question would be, by which method? Can Rosa get the job done without the need of the judges or will Esparza manage to drag the fight out for 25-minutes with her notorious wresting? Not to discredit Esparza – since she’s never looked better in her pro career – however, Namajunas’s elite boxing and much-improved ground game will end up being too much for Carla and as a result, I can confidently say she will continue her Strawweight reign.

This is a rematch 8 years in the making and it is a rematch from the Ultimate Fighter season 20 when the strawweight title was introduced. In this matchup I believe that Esparza has fewer routes to victory, in fact I think she has one route to victory and that is securing takedowns and controlling Namajunas. I believe Rose has elevated her game both physically and mentally and we’re going to see her remain the strawweight champion, Namajunas will most likely win a unanimous decision using her movement and crisp striking while defending Esparza’s takedowns.

Easiest fight of the night to predict for me – I think Rose is going to absolutely walk through Carla Esparza here. Truthfully, Esparza is only getting this shot because of how thin the women’s strawweight division is. Plus, Rose is WAY better than the last time they fought. First round KO for ‘Thug.’