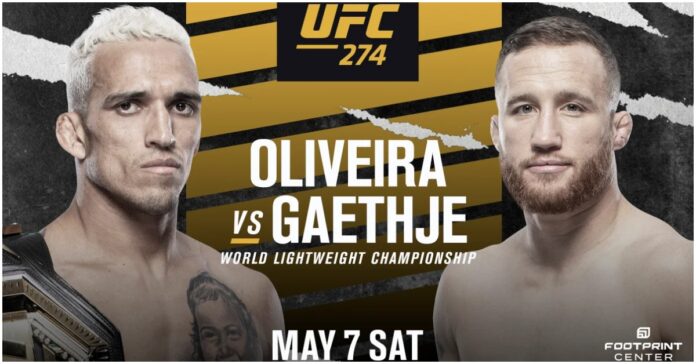 In the main event of UFC 274, lightweight champion Charles Oliveira takes on former interim titleholder Justin Gaethje. Oliveira holds the record for submission finishes inside the UFC, whilst Gaethje is coming off a fight of the year candidate against Michael Chandler at UFC 268.

Whilst Gaethje opened as the betting favorite, gamblers have clearly been taking ‘Do Bronx,’ as the champ goes into fight week as the bookie’s favourite to win. Both men are such dangerous customers that it’s an incredibly hard one to pick. Let’s see what the LowKickMMA staff have to say:

Charles Oliveira vs. Justin Gaethje is an incredibly hard fight to pick. Both men are lethal action fighters who have proved time and time again that they can finish just about anyone. Oliveira brings an extremely dangerous submission threat, whilst Gaethje has the ability to put a hellacious beating on his opponents that can break even the toughest fighters. Personally, I will be supporting Oliveira, but if I had to make a prediction, I would have to side with Gaethje by KO/TKO.

Despite what facts tell us from Charles Oliveira’s reign as UFC lightweight champion, I still have a perpetual thought that the Brazilian is likely on the cusp of a title loss. He managed to rally expertly against Michael Chandler to land the undisputed title, and then in December, was forced to survive some rocky moments en route to a title defense win against Dustin Poirier. A 10-fight winning run should also help put to rest doubts of Oliveira’s sudden demise, however, despite finding numerous routes to success for the Sao Paulo native against the aforenoted duo, I’m finding it quite difficult to side with the defending champion against challenger, Gaethje. Former interim titleholder, Gaethje – stylistically at least, presents such a dangerous opponent for Oliveira. His striking is second to none at lightweight. His wrestling defense also hangs with the division’s upper echelon, but Oliveira still somehow tends to find a way to traverse tricky tracks. A measured and concise striking approach from Gaethje landed him a unanimous decision win over Chandler last November. And I believe a similar approach from the Trevor Wittman product leads him to a title-clinching performance – courtesy of a stoppage victory late in the headlining tangle.

Super excited to watch this fight go down. Both competitors are great and have the ability to win come this Saturday. I’m curious to see how Oliveira will manage those low kicks from Gaethje. I see Oliveira trying to survive the first round or two and then coming back for a submission win. One thing for sure, the win will be a finish and the fight won’t go the distance. Prediction: Charles Oliveira by submission or TKO

I find it so difficult to pick against the champ, purely down to his grit to come out on top after facing adversity. With that being said, I feel Justin Gaethje has the tools to get it done. My official pick is Gaethje by knockout. I anticipate Gaethje walking forward, putting on the heavy pressure as always, throwing bombs. Oliveria is known to get dropped at times, and I believe once the power of Gaethje lands frequently, he won’t recover. Gaethje’s leg kicks will play a huge factor in the early rounds. If he can completely shut down the movement of Oliveria, I think he’s got the golden ticket to a victory. Gaethje does need to be on the ball if the fight hits the mat, but I believe Oliveria will struggle to get the fight to the ground early on. Overall, Gaethje’s power, pressure, and relentless style will be too much for Oliveria.

For me, this fight ends with Charles Oliveira retaining the UFC lightweight championship. Don’t get me wrong, the longer the fight stays on the feet, the more I think it favors Gaethje, especially with those slamming leg kicks. However, I’m going with Charles because I see this fight going to the ground, and I stand by my view that ‘Do Bronx’ is the most dangerous, offensive BJJ fighter in MMA today. I see a third-round triangle choke for the champ.

With the UFC Lightweight division stacked with top-level competitors, at UFC 274 we get to witness the best of the bunch go head-to-head. The Oliveria vs. Gaethjie showdown is an interesting affair, with both athletes being very technical. However, with Justin Gaethje’s renowned power, in addition, to Oliviera’s vulnerability from uppercuts within the pocket, I see ‘The Highlight’ coming out with the biggest highlight of his career with a KO against the Champion. Nevertheless, this is not a fight I will be betting on, it is too close to call.

This is one of the most interesting and high level lightweight matchups, with a clash of styles that could produce one of the most exciting fights of all time. Both have shown that they belong at the top of the division, but I think Oliveira will get the job done and remain the king of lightweights.

Are you backing Charles Oliveira or Justin Gaethje?