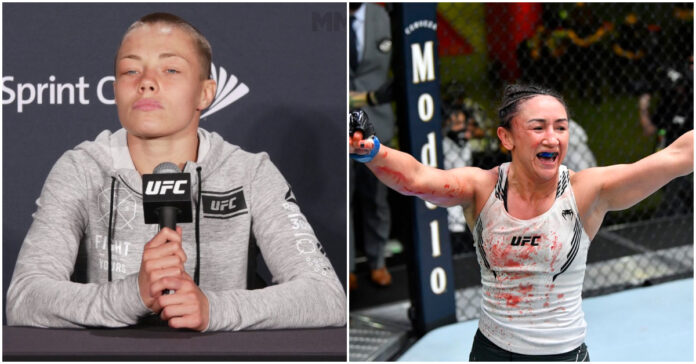 Rose Namajunas believes she’s clearly the best in her division and looks to solidify her status as the greatest strawweight in women’s mixed martial arts history.

UFC women’s strawweight champion Rose Namajunas will be facing Carla Esparza in a rematch eight years in the making since their first encounter. ‘Thug’ Rose took on Esparza in The Ultimate Fighter season 20, which introduced the 115 lbs division to the promotion. Although Namajunas was going into the bout as a big favorite, Esparza eclipsed her with a wrestling-heavy game plan and won via rear-naked choke.

Ahead of her rematch with Esparza at UFC 274, Rose Namajunas spoke to MMA Fighting about avenging her loss and how it would add to her legacy.

“I think what I see is, I’m clearly the best,” Namajunas said. “Obviously. It’s just a question of whether I’m the greatest in the division of all time. And I think this is a huge step toward that for me, and that’s the big test.”

Rose Namajunas believes Esparza to be a big test

In their first contest in 2014, Rose Namajunas stepped in her fourth professional MMA fight against the veteran Esparza who’d held Invicta FC gold. The outmatched level of experience may have played into the outcome of their first match. While she did not win, the future looked bright for the soon-to-be two-time and current world champion.

Namajunas went on to fulfill her potential when she shocked the world with a first-round knockout of Joanna Jedrzejczyk, the woman who took the title from Esparza and looked absolutely dominant in her run, three years later at UFC 217. Rose has shied away from talks about her greatness and it looks like she just might be accepting the quality of her abilities now.

“Joanna, I think, is probably [who people think about] most [when they think of the strawweight division],” Namajunas said. “Just during her time, she came around at a time where the level of competition just wasn’t even close to hers. So I think that I guess what I’m looking to do is to try to set myself apart, because I’m clearly the best, but I think in the last fight maybe it was kind of close, so I’ve really been working my butt off to just make sure that I can set that distance between all of us.

“I used to hate the term legacy,” Namajunas added, “when people would talk about it or just other fighters and stuff, but I think I have a different perspective on what it really means. It’s something that, it’s very intriguing, it’s a very intriguing topic, and it definitely adds a little bit of an element to motivation in my training and like, ‘Wow, look at where I’ve come and look at what all is available in front of me and possible.’ But really, in actuality, it’s just focusing on the present and focusing on just performing my best.

Namajunas sees the growth in Esparza’s game as she’s developed into a more well rounded skillset. She also believes ‘The Cookie Monster’ has packed on more muscle making her a tough challenge to overcome this weekend.

“She said she’s a bigger, better version of herself, and I agree with that,” Namajunas said. “I think her traps are bigger. She’s got bigger muscles and I would imagine she’s a lot stronger, her technique has to be crisper, and I think a lot of girls maybe overlook her blitz attacks and her boxing and stuff like that. So I just make sure that I look at all of those things and take that into account for my preparations, and I think she’s just a bigger, better version of herself than she was eight years ago, and I’m ready for that.”