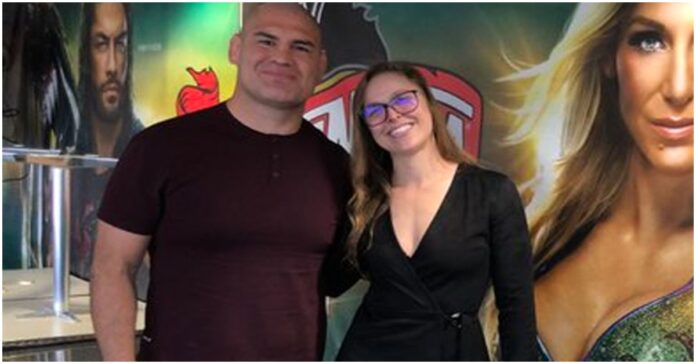 WMMA legend Ronda Rousey has voiced her support for Cain Velasquez who is currently facing more than 20 years in prison after being charged with attempted murder and nine other offences, following an incident that occurred in San Jose.

The former UFC heavyweight champion allegedly fired a handgun into a truck occupied by Harry Goularte Jr along with two other people one of those being Goularte’s stepfather.

The 39-year-old has received a lot of support from the MMA community. Rousey is just the latest in a long line of current and former fighters to join the #FreeCain movement.

“I would have done the same thing if not worse #freeCainVelasquez.” Rousey wrote on social media.

Ronda Rousey Has Recently Returned To The WWE

Rousey has just returned to the WWE making her shock comeback at the productions Royal Rumble pay-per-view in January.

It was her first professional wrestling appearance since 2019.

The 34-year-old will now headline WrestleMania 38, which is set to take place on April 3 at AT&T Stadium in Arlington, Texas.

This confirms Rousey will be sticking around for a while and that appearance isn’t just a one-off as we often see with WWE legends at epic events.

‘Rowdy’ first appeared in WWE at the Royal Rumble back in 2018 and instantly became one of the biggest stars on the roster, which eventually led to her headlining WrestleMania 35 in 2019.

On that night, Rousey lost her title in the main event which subsequently led to her leaving the promotion.

The former UFC bantamweight champion has since started a family with her husband, Travis Browne.

Do you agree with Ronda Rousey? Should Cain Velasquez walk free from jail?