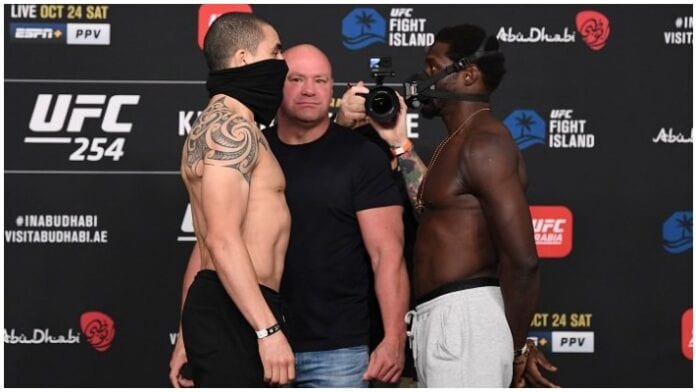 In the UFC 254 co-main event former middleweight king Robert Whittaker is looking to earn another shot at gold when he takes on surging contender Jared Cannonier. A big fight with title implications. Who’ll win? Let’s find out…

Round 1: Jared Cannonier opens up with a snapping low kick. Robert Whittaker is moving really well bouncing in and out. Both men slip one after the other. Back to the striking range they go. Whittaker goes high with the kick, Cannonier does well to block it. ‘The Killa Gorrilla’ continues to land with his low leg kicks. The former champion is beginning to find his range. Whittaker knocks his opponent back with his latest strike which got a clear reaction. He’s starting to dictate this first round. Cannonier remains a threat though with his outside kicks. Whittaker goes high again with the kick. Cannonier is taking them on the arms but they seem super powerful. They continue to trade short shots right up until the horn sounds to end round one.

Round 2: Whittaker opens the round with a nice right hand. He then doubles up with the jab but eats another nasty leg kick for his efforts. ‘The Reaper’pops out a nice jab. Cannonier reacts by poking out his tongue. They clash and Whittaker grabs the back of his opponents head and rattles off an uppercut before separating. Cannonier counters off the jab this time to land a nice right hand. The Aussie is not deterred though and continues his impressive jab work. It’s a real battle right now between Whittaker’s jab and Cannoniers leg attacks. A really even fight thus far. Whittaker grabs Cannonier and secures a takedown. ‘The Killa Gorrila’ does really well to pop straight back up. He immediately has Whittaker on the back foot but the former champ is able to circle away and re-take the center. Whittaker lands successive big right hands to close out the second round.

Round 3: Whittaker continues with his jabs and rights at the start of the final round. He mixes in a front kick to keep Cannonier at bay. Whittaker goes up top with a high kick which lands! Cannonier is wobbling all over the place and eventually falls to the mat. Whittaker tries to swarm on the floor but Cannonier is doing really well to hang in. Whittaker takes the full mount position and starts dropping bombs. He transitions to the back and tries for the choke. Cannonier shows an insane heart to not only survive but make his way back to his feet. They clinch against the fence for a moment before getting back to striking range. Whittaker pops out his jab and another! Cannonier will not stop coming forward though. He lands a nice shot to the body which gets a reaction from Whittaker. He lands a shot upstairs which seems to wobble Whittaker momentarily. Cannonier tries to follow up but is unable to find the finish before the horns sounds to end the fight.