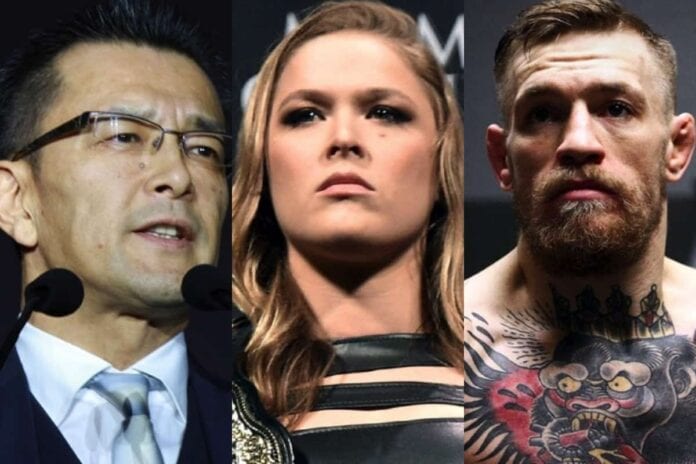 Nobiyuki Sakakibara is a pioneer in the Japanese MMA promotion, and knows a thing or two about who would succeed in the overseas market.

“He would do fantastic,” Sakakibara said in an interview with MMA Fighting. “The fans would go crazy over him.”

“Their style, Conor and Ronda, given the weight class and divisions of who they are, being able to make such a huge success financially, that has changed history within the fight game,” he said.

Since the legendary Pride days the Japanese MMA market has been in a bit of a funk, however, Sakakibara is looking to change that with the launching of his new Rizin FC promotion.

Rizin just finished up it’s first event this past April in Nagoya, and also held a two-day event prior to that towards the end of last December that featured fighters such as ‘King Mo’, Wanderlei Silva, and the return of Fedor Emelianenko.

While Rizin’s next event has yet to be announced, UFC featherweight champion Conor McGregor is currently awaiting the announcement of his next bout, which is expected to be a rematch against Nate Diaz.

No news of the return of Ronda Rousey, on the other hand, has been made after the former women’s bantamweight queen had her hopes of an undefeated career head kicked away by Holly Holm back at UFC 193 in Melbourne.

So how would the two stars fair in the Japanese market, and do you agree with Sakakibara’s comments?