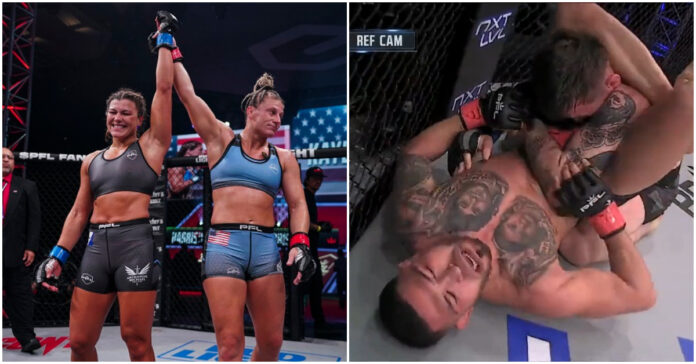 The Professional Fighters League (PFL) 3 fight card saw the big names come out on top as Kayla Harrison extended her undefeated run to 13.

Two-time PFL champion Kayla Harrison returned to action against Marina Mokhnatkina at PFL 3. The former Olympian won by unanimous decision in a lopsided contest. Though Harrison believed her performance to be “utter dog crap”, her dominant display was evident on the scorecards.

With her win over Mokhnatkina this past Friday, Harrison has officially surpassed Amanda Nunes, Cris Cyborg, and Ronda Rousey for the best start to a women’s MMA career in history.

Anthony Pettis takes home the finish of the night

Former UFC and WEC champion Anthony Pettis put on a signature performance against Myles Price to win by triangle choke in the opening round of the bout. Following a rough start to the regular season that saw ‘Showtime’ drop two fights by decision, Pettis is aiming for another run at a third major promotional title.

With his thrilling submission win over Price, Pettis took home the Finish of the Night bonus as he moved up the lightweight standings. He has racked up eight performance bonuses over his UFC run that included wins over the likes of Cowboy Cerrone, Stephen Thompson, Charles Olivera, and Benson Henderson.

Former Bellator welterweight champion and UFC title challenger Rory MacDonald returned for his second PFL season against the newcomer Brett Cooper. After beginning his 2021 PFL campaign with a quick six first-round submission, MacDonald lost the next two by decision including one considered to be one of the worst robberies in the game against Gleison Tibau.

Getting the fight to the mat in the first 15 seconds, the veteran MacDonald made quick of Cooper as he dominated his way to a first-round finish. After doing some damage with his ground and pound, ‘Red King’ took Cooper’s neck to lock in a rear-naked choke and take a “6 point finish”.