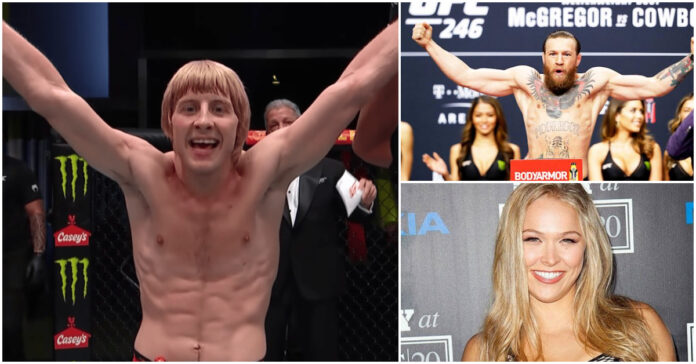 After just two fights in the UFC, Paddy Pimblett has ranked himself alongside former champion Conor McGregor and Ronda Rousey based on the amount of attention he has received.

Paddy Pimblett believes himself to be the biggest name in the UFC after just two wins in the organization. The former Cage Warriors champion is coming off a first-round submission win against Kazula Vargas at UFC Fight Night: Volkov vs Aspinall. Pimblett survived an early scare to come back and make Vargas tap out. Pimblett was signed to the UFC last year and won his promotional debut by knockout against Luigi Vendramini.

The British fighter has been able to create a lot of buzz resulting in a seven-figure deal with media company Barstool Sports after his UFC debut. Pimblett shocked the MMA community when he shared his purse for the fight revealing him to be on the UFC’s most basic salary package of $12,000 to show and $12,000 to win.

In a recent episode of UFC Destined, Paddy Pimblett put his name next to the likes of superstars Conor McGregor and Ronda Rousey:

Is Paddy Pimblett a global superstar in the making?

Conor McGregor had a dominant run that saw him clear out the UFC featherweight division on his way to knocking out longtime undefeated champion Jose Aldo in 2015. The ‘Notorious’ then created history by becoming the first UFC fighter to hold belts in two weight classes simultaneously.

After UFC merged with Strikeforce in 2013, Ronda Rousey transcended women’s MMA by dominating her opponents in the UFC and becoming the promotion’s first-ever female champ. She was an Olympic gold medalist in judo and used her grappling skills to submit opponents with her trademark armbar.

Rousey lost her bantamweight title in 2015 to Holly Holm in a massive upset and subsequently retired from fighting after being knocked out by Amanda Nunes in her final fight.

UFC President Dana White acknowledged Pimblett’s potential level of stardom but believes that ‘The Baddy’ needs to keep winning fights if he wants to be on their level.

“People love him and now Paddy has got to get in and put in the work and win the fights,” he told talkSPORT. “People love Conor and Conor came here and did what he set out to do. If Paddy can get in here and win these fights, he’ll be a huge superstar.”

Following his most recent win, Paddy Pimblett admitted that he doesn’t want to fight a ranked opponent at 155-pounds until he racks up four more wins. The 27-year-old is hoping to negotiate a new contract with the promotion and earn more money after his next fight.

Do you think Paddy Pimblett can be the next megastar like Conor McGregor and Ronda Rousey?