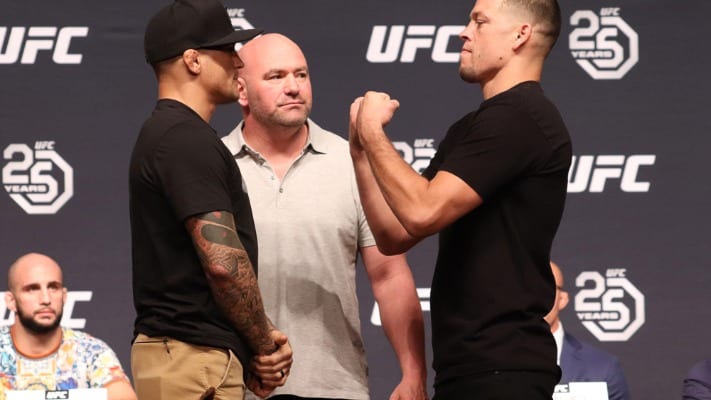 Nate Diaz had a couple of things to say following UFC 257.

Conor McGregor suffered a second-round knockout defeat to Poirier in the UFC 257 headliner last night in what was one of the most shocking moments in the sport.

And Diaz — who was the first to finish McGregor inside the Octagon with a rear-naked choke during their 2016 fight — took to social media on Sunday to respond to his old foe’s latest setback.

“These guys all get finished all the time 🤦🏻‍♂️”

Diaz would later follow it up by challenging Poirier to a fight.

“I’m training to whoop ur ass next. Be about it don’t talk about it 👊🏼”

Diaz and Poirier, of course, were initially set to collide at UFC 230 back in November 2018. However, it never came to fruition after the latter had to pull out due to injury.

That led to somewhat of a beef between the pair since with Diaz mocking Poirier for not being able to make it to war. Perhaps after last night’s events, we could finally see that fight happen.

That’s if Poirier is down to fight Diaz in the first place as he is only looking for lightweight gold next.

What do you make of Diaz’s comments?