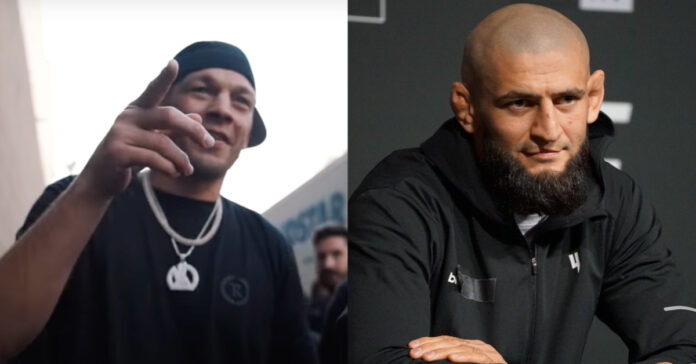 Nate Diaz has uploaded a new video that details his side of events during the infamous UFC 279 pre-fight press conference brawl.

Earlier this month, UFC President Dana White was forced to call it quits on the UFC 279 pre-fight press conference due to backstage altercations involving multiple fights such as Khamzat Chimaev, Kevin Holland, and Nate Diaz.

However, Tony Ferguson was just happy to be there.

The melee was said to be initiated by Chimaev and Holland, where the pair had to be separated before any more punches were thrown.

As Chimaev and Holland were going back and forth with each other, Nate Diaz and his teammates arrived backstage ready for a press conference, although, we know that doesn’t go according to plan.

In the video we see unpleasantries and flying water bottles being exchanged backstage between the teams, as we can hear Diaz shout at Chimaev:

Nate Diaz was scheduled to fight Chimaev in the main event of UFC 279 – which was the last fight on his UFC contract. However, a day before the event, the matchup changed to Tony Ferguson due to Khamzat Chimaev failing to make the welterweight limit by 7.5lbs.

Although the UFC has not fined any of its fighters that were involved in the UFC 279 brawl. The Nevada State Athletic Commission (NSAC) has been continually looking into the incident to see if there is potential for disciplinary action.

Now, with Nate Diaz’s new video, they have additional footage to review the case to see who is at fault.

Do you think Nate Diaz is to blame?