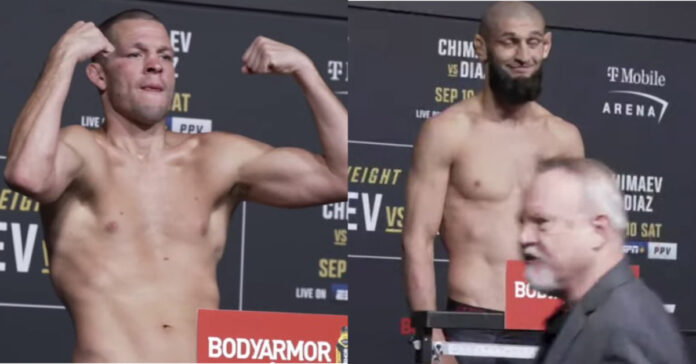 The stage is set for UFC 279 as all 26 fighters are weighed in and ready to square off on Saturday.

The early weigh-in show took place in the UFC Apex around 12 pm ET. The Ceremonial weigh-in event will shortly follow as it’s set to take place in the T-Mobile Arena in Las Vegas at 7 pm ET.

There was much concern surrounding Khamzat Chimaev (11-0 MMA) making weight before the weigh-in show. Chimaev took over an hour to hit the scales, where he weighed 7.5 pounds over the limit.

It was his dancing partner Nate Diaz who weighed in first and he walked out as he walked in, ‘flexing’ as he made weight without a sweat.

However, with Khamzat missing weight it has put the main-event in jeopardy and MMA fans are still waiting to find out what decision Dana White will make amid the controversy.

Despite the UFC having to face multiple issues going into UFC 279, their co-main event didn’t let them down. Both Li Jingliang (19-7 MMA) and Tony Ferguson (26-7 MMA) made weight with seemingly no problems and are ready to throw down at welterweight.

You can check all of the UFC 279 weigh-in results down below:

Who are you most excited to see fight at UFC 279?