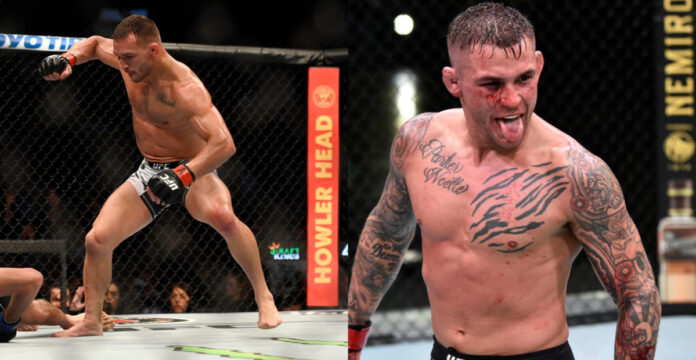 Michael Chandler and Dustin Poirier will face off in a three round bout at UFC 281 in Madison Square Garden.

The fight had been in the works for some time now, but has finally been made official. The two have been linked to each other since they had to be separated from one another at UFC 276. After that scrum, Chandler and Poirier were taking shots back and forth at each other. Chandler told Poirier that he needs to act like a professional, while Poirier claims he only said what was on his chest.

Chandler is coming off of a brutal front kick KO victory over Tony Ferguson, that ended up sending Ferguson into the welterweight division. Since debuting in the UFC, Chandler has had an enormous amount of hype behind him, and he has done more than live up to it.

Chandler has come the closest to beating Charles Oliveira, as he almost captured gold in just his second fight with the organization. He also had one of the best fights in recent memory, when he went toe to toe with Justin Gaethje, but lost. His knockouts over Ferguson and Dan Hooker are incredible highlight finishes as well, cementing him as one of the most exciting fighters in the UFC.

According to reports, it seems as if Chandler will be staying for the one haul, as he has inked a new multi-fight deal with the UFC.

Porter’s last fight came eight months ago, when he lost to Charles Oliveira, in what was ‘Do Bronx’s’ first title defense of his career. Poirier came up short once again as he was submitted in the third round, in the same way he lost to Khabib Nurmagomedov, the first time he challenged for the title.

Who do you think wins this fight, Poirier or Chandler?