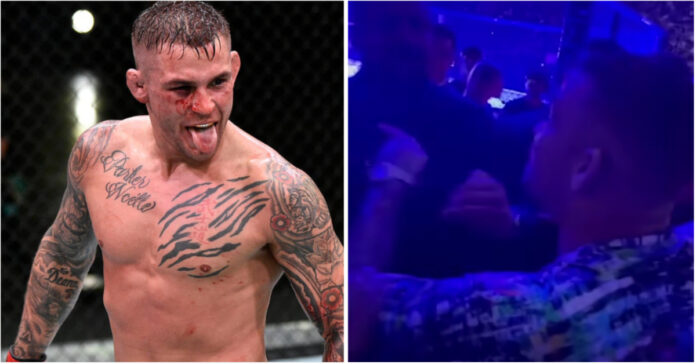 UFC 276 brought with it some huge clashes between some of the biggest names on the promotion’s roster. It seemed a night to remember, not only because of the fights, but also some of the backstage moments that were captured on video.

An intoxicated Henry Cejudo and the ever-confrontational Nate Diaz both caught headlines, but in a video captured by UFC welterweight Gilbert Burns, we see Dustin Poirier and Michael Chandler having to be ushered off by security while shouting at one another.

The pair have been involved in what seemed to be a harmless rivalry, calling out one another during interviews and via social media, but it now seems that rivalry has soured into something more serious.

The footage isn’t incredibly clear and the audio is hard to make out but we see Poirier and Chandler standing across from one another, pointing and shouting. At points, we hear Poirier several times call Chandler a “fake motherf*cker”, also saying “I’m gonna f*ck you up”, it is unclear what Chandler said in response.

Both men are ranked inside the top five (Michael Chandler No.5, Dustin Poirier No.2) and are both currently unbooked. The pair are both big fan favorites and a fight between them would go down well with MMA fans, not to mention, stylistically the fight has the potential to be incredible.

Although both are highly ranked, they would both need at least another big win to get themselves another title shot. There is clearly needle here and the build-up could lead to a big event, why not book it?

Would you like to see Dustin Poirier vs. Michael Chandler?