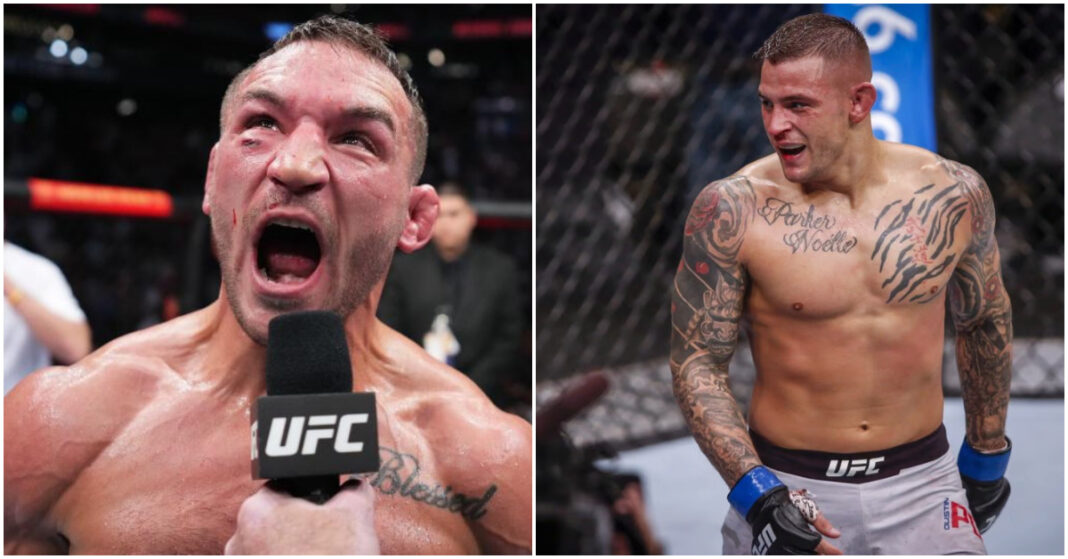 Michael Chandler is turning the heat up on his budding rivalry with Dustin Poirier.

At UFC 274, Michael Chandler became the first man to knock out Tony Ferguson. He put ‘El Cucuy‘ to sleep with a vicious front kick flush on the jaw that sent Ferguson face-first to the canvas. As much notoriety as he had gained with his performance, he doubled down during the post-fight octagon interview with one of the most electrifying promos in the history of UFC.

Taking aim at the winner of Charles Oliveira vs. Justin Gaethje, Chandler called for a title shot. He expressed his willingness to compete against Conor McGregor even at 170 lbs. Following the night, there was a brief scuffle with Nate Diaz online as well.

Amidst an array of options to match up against, one man who did not seem to cross ‘Iron’ Mike’s mind was Dustin Poirier. After witnessing the many callouts by Chandler, ‘Diamond’ took issue with the omission of his name and made his thoughts clear.

In a tweet suggesting Poirier was afraid of Chandler, the 33-year-old Louisiana native took a dig at the former Bellator champion.

While it can’t be confirmed whether he waited for the prelims of UFC Vegas 54 to be over, Michael Chandler fired back at Poirier with a cheeky reference to his knockout loss against Michael Johnson. ‘Menace’ had a skid in his career going into the bout with four consecutive losses prior.

Johnson’s knockout of Alan Patrick marked his first win by a finish since his knockout of Dustin Poirier in 2016. Chandler took the opportune time to remind Poirier of that very fact.

“Speaking of Michaels & chins. Congrats to Michael Johnson on his KO tonight. 1st KO since Sept. 17, 2016 – UFC Fight Night: Poirier vs Johnson. Clean KO at 1:35 of the 1st rd in Hidalgo, TX. Michael earned a Performance of the Night Bonus. #chinhistory#ufcvegas54@DustinPoirier“

Fair play to both athletes for taking the verbal jabs in good spirits. A potential showdown between Chandler and Poirier would generate interest from the fans but the UFC might have bigger plans for the pair. As good of a fight as it would be, the two will likely be matched up against different opponents next.

Would you like to see Michael Chandler take on Dustin Poirier next?