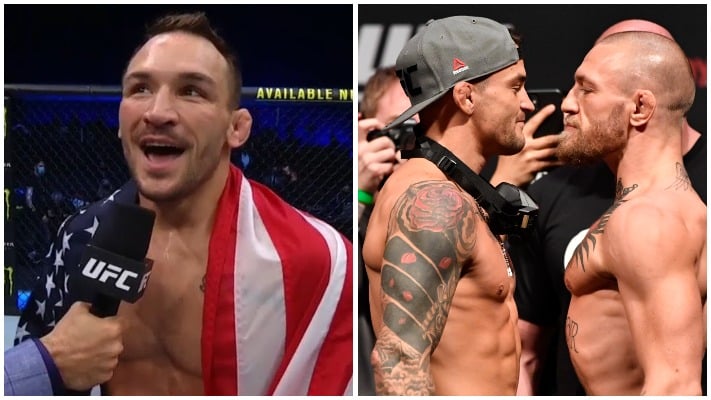 Michael Chandler thinks Dustin Poirier should sit out and wait for Conor McGregor to recover from his leg injury instead of moving on to fight Charles Oliveira for the undisputed lightweight title.

‘The Diamond’ squared off against McGregor for the third time at UFC 264 last month. Unfortunately, the fight came to an inconclusive end when ‘Notorious’ suffered a nasty leg break just before the first frame came to a close.

The former dual-weight UFC champion is currently healing up after undergoing surgery to repair his fractured tibia and fibula. McGregor is not expected to return to fighting before the summer of 2022.

In the meantime, Poirier is expected to be the first challenger to the new lightweight king. Oliveira picked up the 155lb title recently vacated by Khabib Nurmagomedov at UFC 262. ‘Do Bronx’ survived a tough first round before stopping Chandler early in round two.

During a recent interview with Helen Yee, the former Bellator champion explained why Poirier should sit out rather than try to realize his dream of becoming a true UFC champion.

“If I’m Dustin Poirier I’m just waiting for Conor 4, you know? I am,” Chandler said. “This was an interesting hot take that I actually heard Jesse ON FIRE talking about that if Poirier goes and wins the title, can Conor come right back and fight Poirier if he has the title? Crazier things have happened.”

“But if I’m Poirier I’m waiting out and waiting for Conor 4, especially after he said numerous things about my wife and my kids and killing me, all that kind of stuff,” Chandler added. “But I also know, and this is a testament to Poirier as a competitor, he wants to win the ultimate prize in mixed martial arts. He’s been an interim champion, but he hasn’t been a full-fledged 100% undisputed champion. So I think the competitor in him will go fight Charles Oliveira, but there’s a part of me that says he may as well just wait out and get the big money fight in Conor.” (Transcribed by Sportskeeda)

Do you agree with Michael Chandler? Should Dustin Poirier sit out and wait for a lucrative fourth fight with Conor McGregor?