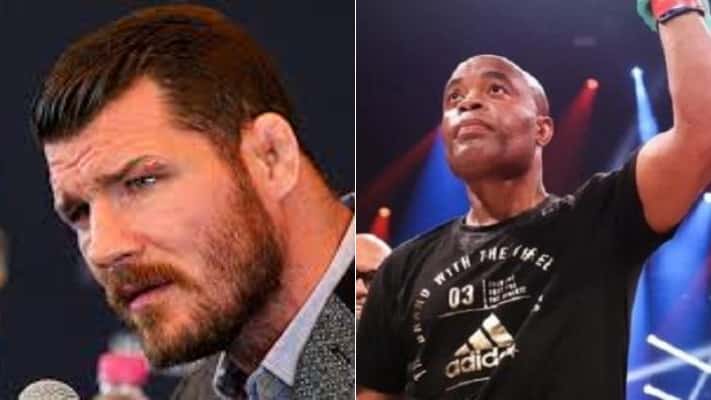 Michael Bisping has nothing but praise for former rival Anderson Silva after his successful transition to boxing.

For a while, Bisping and Silva were MMA’s version of two passing ships in the night. Though they always seemed destined to meet each other in the octagon, things just never seemed to line-up properly. The long lasting rivalry would finally come to a head in 2016 when the two would engage in a spirted five-round battle that saw Bisping come out on top.

After their fight, Bisping would, of course, step in on short notice at UFC 199 against Luke Rockhold and finally lay claim to the UFC middleweight championship. As for Silva, his loss to Bisping was part of the 1-7-1 stretch that would end his MMA career.

Though they would occasionally continue to throw quips each others way, there was no doubt that the two men gained an immense amount of respect for each other after their fight. That’s why it should come as no surprise to hear Bisping praise his former rival after he knocked out Tito Ortiz in the co-main event of Triller Fight Club (h/t MMA Fighting).

“Tito said he’s gonna go out there and punch a hole in his head and he’s a fighter all the rest of it, and he ain’t gonna use none of that wing-chun bollocks on him. That is not the way you fight Anderson Silva. You can’t go in against Anderson Silva and be aggressive… No way. Anderson Silva’s timing is impeccable, his reflexes are cat-like, urban cat-like, and the diversity of attacks that Anderson Silva has is mind-blowing…. Tito should have known coming into this fight against Anderson that you have to be strategic.”

Ortiz would instead rush head-long at Silva during their fight, backing him into a corner. He then threw a number of sloppy hooks, which Silva would avoid before answering with a big overhand right. A few left hooks proved to be the final nail in the coffin, and Silva had his second boxing win of 2021 after earning a unanimous decision over Julio Cesar Chavez Jr. in June.

“For Anderson Silva to still be doing this, at this level, at 46 years old, after the career that he had in mixed martial arts – we all know the fall from grace that he had, he lost a few fights and then he ended up getting knocked out by Uriah Hall, it looked like it was over, but he really has had a rebirth and as a fan of Anderson Silva, and make no mistake, I’m a fan of Anderson Silva, you have to be. How can you not respect the body of work?” Michael Bisping continued.

As for what’s next for Silva is anyone’s guess. He played it coy after the victory but made it clear he wants to continue fighting. Bisping was quick to offer who he thinks would be the ideal opponent for ‘The Spider’.

“What’s next for Anderson Silva? I don’t know but every part of my body says that if Jake Paul really wants a tough test, Anderson Silva is your man,” Bisping concluded. “Look no further. You think you’ve got what it takes and you want to pick off somebody that’s not in their prime – Anderson Silva is 46, many knockouts now, he’s long in the tooth, a battle-worn veteran – but Anderson Silva will give you everything you don’t want, so be careful.”

Are you surprised to see Michael Bisping support Anderson Silva? Let us know!