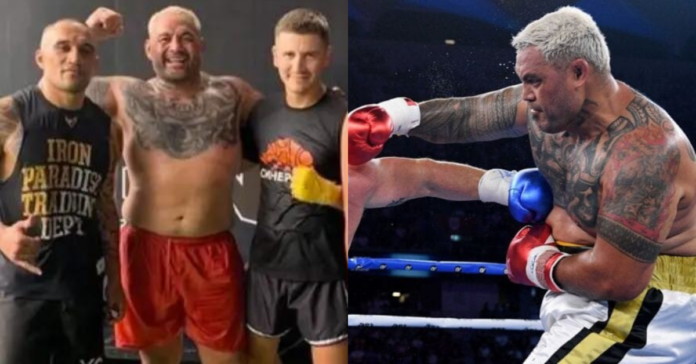 MMA and kickboxing legend Mark Hunt may be 48 years old, but he is looking to be in the best shape of his life. The ‘Super Samoan’ will be facing Sonny Bill Williams in a boxing match on November 5.

When Hunt got the call for the fight, he knew he needed to get in shape. In an interview, Hunt explained:

“No more cheesecakes … When I got the call from Khoder, I’m 48 and have to pay for these lawsuits. I feel great but I got conjunctivitis coming back from Thailand. But I feel good and looking forward to competing this weekend.”

To help get the ‘Super Samoan‘ sharp for his November 5 boxing match, Hunt was working with Powerhouse Phuket and Tiger Muay Thai in Thailand. While in the gym, the Kiwi-born fighter has lost a whopping 60 pounds. On Facebook, he shared a photo.

On November 5, Mark Hunt will be stepping back into the ring. In professional kickboxing, the Kiwi fighter made his professional debut in 1999. In his storied career, he had faced the best of the golden era kickboxers including Mirko ‘Cro Cop’ Filipović, Semmy Schilt, Jerome Le Banner, Ernesto Hoost, and many others. The high point of his career came in 2001 when he won the K-1 World Grand Prix Championship, having defeated Francisco Filho, Stefan Leko, and Le Banner on the same night. Hunt was a feared powerful heavyweight in MMA as well. He would compete in both PRIDE FC and the UFC during his career.

Mark Hunt’s most recent bout was a losing boxing match in 2020 against Paul Gallen. The ‘Super Samoan’ will be seeking to redeem himself when he faces Sonny Bill Williams on November 5. Sonny Bill Williams is an incredibly accomplished rugby player having won the Rugby World Cup twice. In professional boxing, the Kiwi heavyweight has a perfect 9-0 record. Most recently, he is coming off a first-round TKO victory earlier this year.