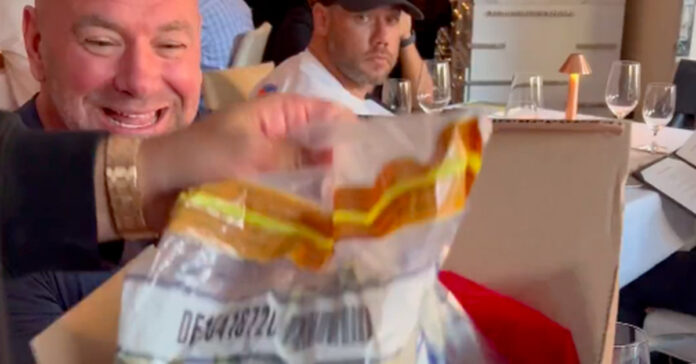 For his 28th birthday, Forgeard was surprised with a massive cash gift by the UFC boss that has gotten the attention of many fans and fighters. With fighter pay continuing to be a hot-button issue in the sport, many believe that White should have used the money to reward underpaid athletes while others argue that the money came out of White’s own pocket and what he does with his own money should not be scrutinized by the MMA community.

“That’s just a slap on these fighters, that’s what upsets me because these fighters are probably living on $10,000,” Hunt told The AllStar. “They can’t get sponsors and that bald idiot goes and gives that YouTuber $250,000. That’s more than probably more than some of the champions get, that’s disgusting.”

Mark Hunt sued the UFC in 2017 claiming that the promotion knew about Brock Lesnar‘s failed substance abuse test before the fighters stepped into the Octagon at UFC 200. Lesnar won the fight via unanimous decision but was later changed to a no contest after Lesnar had tested positive for the banned substance clomiphene during a pre-fight drug test. The lawsuit was dismissed in 2019 and Hunt was ordered to pay the UFC more than $380,000 in a countersuit to recover legal fees.

Following the backlash online from his quarter-million dollar gift to a member of the YouTube prank group, Dana White appeared on The Pat McAfee Show to deliver a rather blunt message to his critics.

“Let me set this record straight,” White said. “First of all, all these people on the internet – go f*ck yourselves. Ok. I spend my money however the f*ck I want to spend my money. Mind your own f*cking business.

“No. 2, if you look at what Kyle and the Nelk Boys have done as far as how they’re handling and a lot of other things that they’ve done, those kids have never asked me for anything, ever. They’ve never asked me for anything, and they couldn’t be better people. Kyle has done so many things for me. Believe me, the $250,000 that I gave him for his birthday, it does not cover the amount of things that kid has done for me.”

One can certainly understand Dana White’s frustration. He gifted the money to a friend out of his own pocket. People gift money to friends and family members all the time. Unfortunately for White and the UFC, they have been under fire for years by fans and fighters for short-changing talent on all levels. So when White gives away a large chunk of money or brags about losing millions of dollars whilst gambling, fans and employees, former and present, are going to have an opinion on it.

No matter what side of the conversation you landed on, Dana White had a very straightforward message to everyone with an opinion on the subject.

“Don’t count other people’s money and mind your own f*cking business,” White said.