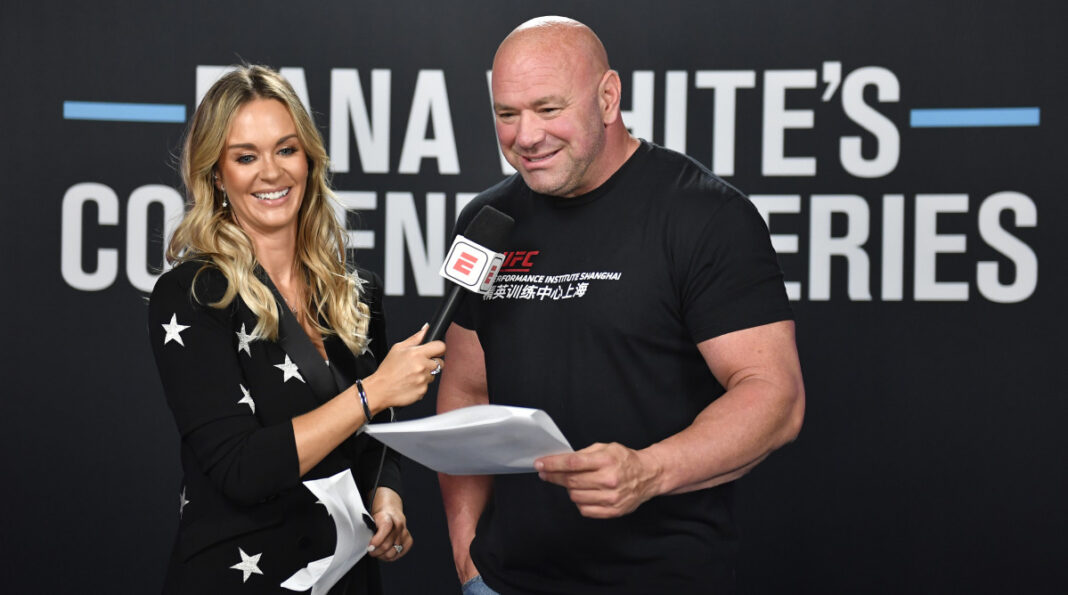 UFC Broadcaster and commentator Laura Sanko was interviewed by MiddleEasy about a variety of topics this past week, most notably maybe was the Joe Rogan part, where she delved into him and the slippery slope that is cancel culture.

Rogan has been under fire after a video compilation came out last week of him using the N-Word and has since apologized.

“It’s a difficult question on many levels because I think first and foremost, it’s important to – for me, at least – that I’m not allowed to have an opinion about what other people should be offended about when the offense has nothing to do with me, or my life, or my situation,” Sanko said. “So I want to make very clear that in support of Joe Rogan, I absolutely would not be supporting the things that he said.

Sanko admitted the video was not good and a bad look for the biggest podcaster in the world, but added that cancel culture is a slippery slope and can be a dangerous game.

“That compilation video is awful. But I guess my entire opinion on the situation is formed on the fact that Joe Rogan thinks it’s awful. It’s not as if Joe Rogan came out and made a ton of excuses or said that he stands by those comments or those things that were said. He came out and made a – I felt like – very heartfelt, genuine apology, not only on that topic, but of course, the previous topic about the COVID-19 podcasts he had done …”

“I think cancel culture in general is a very dangerous, slippery slope because the end game of cancel culture is not feasible,” she said. “We would all love to be able to cut all hatred, all misinformation, all negativity out of the world and have everyone live in a place where we all feel uplifted and positive. But it’s impossible to do that.

Within the UFC and MMA community, there has been an almost overwhelming outpouring of support for Rogan, with Middleweight champion Israel Adesanya being vocal in support of Rogan at the UFC 271 press conference yesterday.

Sanko said she thinks the people who think Rogan should be shut down entirely are misguided.

“And I think when you take someone who has done something horribly offensive, and they apologize, and you still stay, ‘No, no – you should be silenced from here on out,’ you take away all opportunity for growth and healing and reconciliation. And that, I feel like, is, more than anything, what’s missing in the world right now. … I think in terms of the idea of canceling people who, in the past, have done offensive things,” Sanko added. “I sure wouldn’t want to be judged by my worst day in the office; I don’t think anybody would – to provide people an opportunity to say, ‘I was wrong,’ or ‘I will do better,’ and allow them the chance to do that, allow them the chance to be better, allow them the chance to never make that wrong decision again, I think that’s what’s important.

“… I think Joe is a good person. I genuinely do. And I think Joe overall has very, very good intentions in terms of the information he brings forward and the way that he treats people and every personal interaction with him I’ve ever had has been 100 percent positive. But I think more than anything, he’s aware that what he did and said was not right, and he’s apologized for it, and I think we should take him at his apology and judge him on his actions here on out.” (Transcribed by MMA Junkie)

Do you think Laura Sanko’s comments on Joe Rogan are accurate?