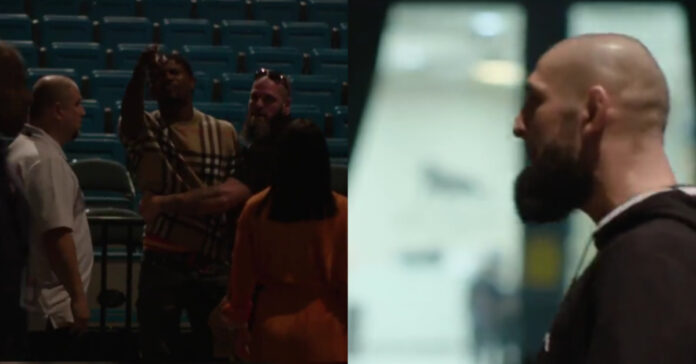 Khamzat Chimaev and Kevin Holland were involved in a brawl backstage as the UFC 279 press conference was scheduled to get underway on Thursday evening.

Up to this point, most of the details we had received were from firsthand accounts. Now, ESPN has released the footage, giving us our best look at what exactly went down between the two men that will now face one another in the UFC 279 co-main event.

In the video uploaded on ESPN MMA’s Twitter account, the footage starts with Khamzat Chimaev and Kevin Holland going after one another and sharing insults. The footage then shifts to Nate Diaz‘s arrival, who began to have words with Khamzat Chimaev and chucking a water bottle in the Swedish star’s direction. In the end, Dana White had no choice, but to cancel the press conference as they were unable to ensure the safety of those in attendance.

After things had seemingly calmed down following the chaos on Thursday night, Khamzat Chimaev struck once again, this time on the scale at the UFC 279 weigh-ins. The Chechnyan-born fighter weighed in 7.5 pounds over the contractually obligated limit for his main event clash with Nate Diaz. This put the entire card in jeopardy.

Fortunately for fans and fighters scheduled to fight in Las Vegas on Saturday night, Dana White and the UFC’s chief business officer Hunter Campbell were able to rework the card. Nate Diaz will remain in the main event, now facing Tony Ferguson. Khamzat Chimaev will face Kevin Holland while Li Jingliang and Daniel Rodriguez round out the main card.