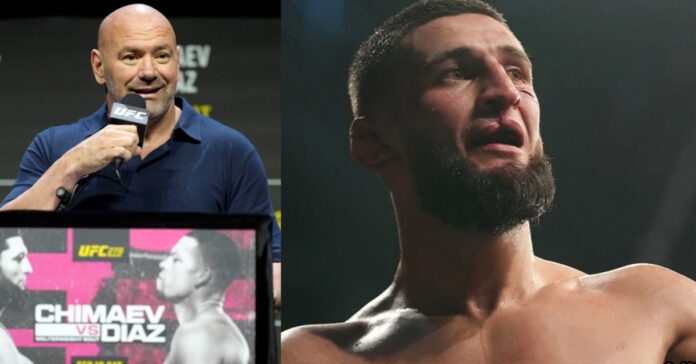 Following the chaos of the UFC 279 weigh-in day, Dana White has shed some light on why one-half of the main event weighed in 7lbs over the welterweight limit.

In a fight that had few doubting the outcome, UFC 279’s main event was initially scheduled to be between undefeated surging contender Khamzat Chimaev, and grizzled veteran Nate Diaz, who is fighting out the final bout of his contract.

However, when it came to weigh-in day, rumors quickly began circulating that Chimaev was way off the welterweight limit. Diaz would weigh in at 171lbs, and after a delay, Chimaev appeared, weighing in at 178lbs.

Since then, the fights have been significantly altered, with Diaz now facing off against Tony Ferguson whilst Chimaev clashes with Kevin Holland in a catchweight bout.

Dana White would announce all these fight changes on SportsCenter, where he also gave some insight into why ‘Borz’ missed weight by such a significant margin.

“So what happened was, he was cutting weight,” said White on SportsCenter. “If you saw him yesterday, he was very, very lean already and he should’ve come in on weight. He started to cut weight and he started locking up and cramping, all the things that happen from a bad cut.” (H/T BloodyElbow).

“Unlike ten years ago, when we were doing this, they call in and we send a doctor up and the doctor determines whether he should keep cutting weight or not. And the doctor told him he shouldn’t. So we jumped on this [issue] this morning.”

Dana White would also announce that alongside Diaz vs. Ferguson and Chiamev vs. Holland, the two fighters that had been left out, Li Jingliang and Daniel Rodriguez, would now face each other.

“Nate Diaz and Tony, like you said, the fans have wanted to see this one forever,” said White. “It’s gonna happen now before Nate leaves the UFC. And yesterday, there were a lot of questions about what happened. Kevin Holland and Khamzat Chimaev actually got into it yesterday backstage. Ironically, they will now fight on Saturday night, and ‘Leech’ vs. Rodriguez is also a fun fight. So, it literally couldn’t have played out any better.”