LowKickMMA.com
Home UFC News Khabib Reveals Why There Was No Conor McGregor Confrontation At World Cup 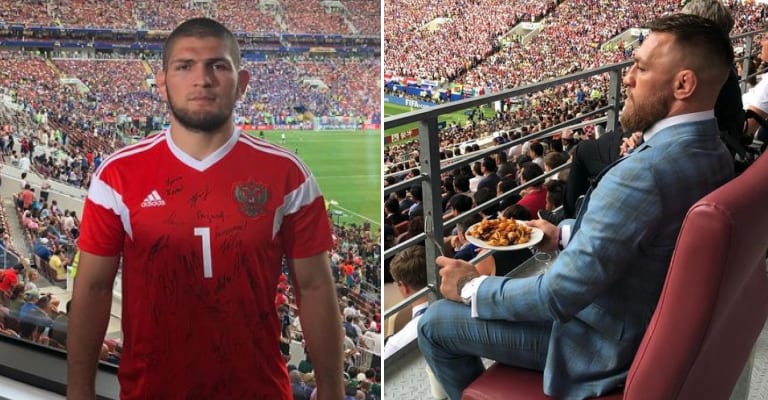 Yesterday while the soccer world was fixated on the World Cup final between France and Croatia, the mixed martial arts world was more concerned with the fact that rivals Khabib Nurmagomedov and Conor McGregor were finally in the same place at the same time.

It turned out that McGregor was a guest of Russian president Vladimir Putin, oddly enough, as it would have been thought that the Dagestani Nurmagomedov would have been a much more likely guest of the leader.

Regardless, Nurmagomedov and the controversial former UFC champ McGregor are rumored to be headed for a massive megafight sometime later this year, although nothing concrete has arisen in terms of details of the booking. “The Notorious” is still awaiting his next court date for the insane assault he initiated by throwing a metal dolly through the window of a bus containing Nurmagomedov and other fighters days prior to April’s UFC 223, so we have no clue as to where negotiations truly stand.

Because of that, some may have been hoping that public clash between the two superstars would provide some direction in that regard, but during a recent interview translated by Express.co.uk (via MMA Fighting), “The Eagle” said that while he did expect he may run into McGregor at the World Cup, he would have kept it professional in hopes of actually getting the fight:

“I thought I’d meet McGregor at the Luzhniki Stadium. But even if we meet now, we still will not be able to find out who is stronger. If there was a cage in the middle of the arena, it would be more interesting. And now something to find out on the street and so on. We are not at that age and not in that position.

“It would be ideal if there were no one around. Or vice versa — to the full stadium, in the middle of the cage, and in it — we. In general, I see no reason to approach him now. We are hospitable people. Let the football look, enjoy Russia.”

A calm, collected outlook from the highly reserved-yet-calculating champion, who apparently wants to let his fighting do his talking in the Octagon. There’s a decent chance we may not get to see the McGregor match-up this year, however, and even a chance it never happens at all.

“The Eagle” is aiming for that fight, yet if it doesn’t materialize, he recently revealed on his YouTube show that he’s eying a fight with his idol Georges St-Pierre, the winner of July 28’s Eddie Alvarez vs. Dustin Poirier main event at UFC on FOX, or perhaps even a fifth scheduled fight with Tony Ferguson:

“If not Conor, if not (Georges St-Pierre), I think winner of Eddie Alvarez versus Dustin Poirier.

”The winner deserves a title shot. About Tony Ferguson, I don’t know. He has surgery but if he can [fight], why not? Tony Ferguson is the biggest matchup for me. It is the match I want.”