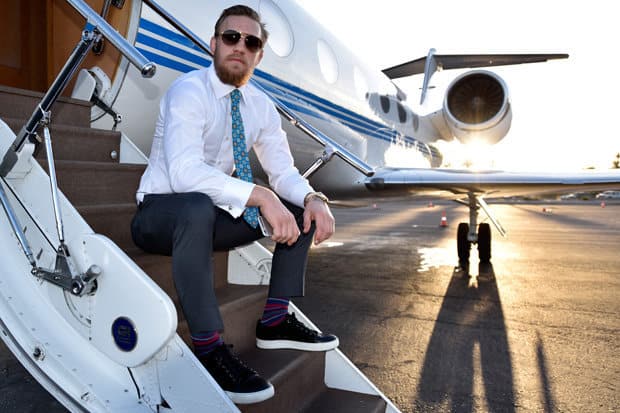 If you heard that a high-profile MMA fighter was going to be in Russia to attend the World Cup final as a special guest of Soviet President Vladimir Putin, you most likely would have thought Khabib Nurmagomedov.

That would’ve been a safe assumption, and although the UFC lightweight champion was in attendance today, he was not there at Putin’s request.

That fighter is “The Notorious” Conor McGregor. McGregor wasn’t in Russia just to take in the spectacle that is the World Cup, apparently he also has ambitions of building a “Russian Compound”. Your guess is as good as mine.

McGregor, as it turns out, was the special guest of Russian President Vladimir Putin. Both men enjoyed each other’s company as they took in the football game. “The Notorious” one hurled words of praise at the President.e

Today I was invited to the World Cup final as a guest of Russian President Vladimir Putin. This man is one of the greatest leaders of our time and I was honored to attend such a landmark event alongside him. Today was an honor for me Mr. Putin. Thank you and congratulations on an amazing World Cup. Россия вперёд!

As stated above, Khabib was also in attendance for the day-long festivities, but there have been no reports of Nurmagomedov and McGregor causing any ruckus at the last game of the World Cup