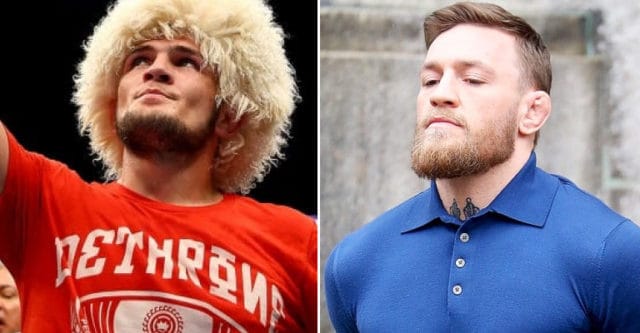 After months of animosity, Conor McGregor and Khabib Nurmagomedov are finally in the same place.

Unfortunately for MMA fans, it’s just not for a fight.

The two have been at odds in a big way since McGregor stormed the Barclays Center this April and threw a metal dolly through a bus containing Nurmagomedov and several other fighters at UFC 223, forcing three fights off the card and landing “The Notorious” in jail on assault charges, for which he’ll appear in court again in Brooklyn this month. But that’s not preventing him from enjoying the best of the sports world abroad.

With France facing Croatia in the 2018 World Cup Finals in Moscow, Russia, today (Sun., July 15, 2018), both McGregor and Nurmagomedov have made their presence known on social media. First, McGregor tweeted late last night that his “Russian Compound” was taking shape as he walked through an undisclosed location with his entourage:

Next, Canadian bronze medalist in soccer, Karina LeBlanc, tweeted a picture with McGregor at the game earlier this morning:

Khabib made his presence known as well, saying he had fulfilled a childhood dream come true by attending the World Cup finals on Instagram:

News also came that “The Eagle” had a TV pass for the world-anticipated event (for whatever that’s worth):

Khabib has a tv pass if that makes any difference… pic.twitter.com/SJGXlDfZ2p

McGregor and Nurmagomedov are living the high life at one of the year’s most awaited sporting events, but there’s still a long line of red tape to pass for them to finally get their bad blood-filled grudge match signed.

The UFC is waiting for the Irish superstar’s legal issues to pass, so even though Khabib says he wants to fight this fall or November-December at the latest, McGregor may not be clear of his latest self-caused hurdle – and his ongoing negotiations with the UFC may not be over even if he is.

Will Conor vs. Khabib ever happen? Or will they just continue with the public grandstanding?