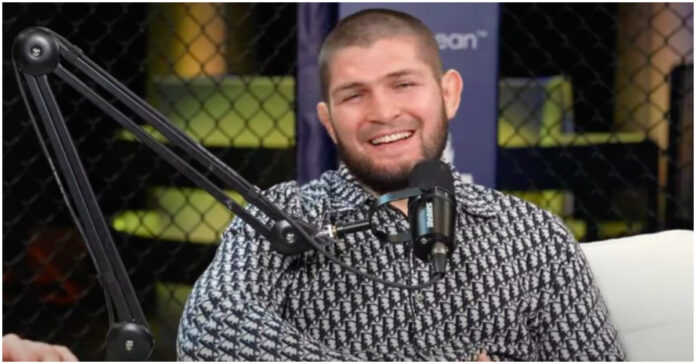 According to Khabib Nurmagomedov, Conor McGregor’s boxing match with Floyd Mayweather was all just one big circus act.

Aside from Jake Paul hitting Dana White with his best Jimmy B. Rabbit impersonation, no one has been able to grab the attention of the combat community like Khabib has of late.

Widely regarded as the best mixed martial artist to ever meet the scales at 155 pounds, ‘The Eagle’ appears to be making the most seamless transition into running his own fight club.

In the middle of the octagon that would soon host Eagle FC 44, Khabib sat down with the popular Full Send Podcast and offered up his thoughts on Showtime’s boxing special between Conor McGregor and Floyd Mayweather.

Khabib was asked by host Kyle Forgeard about the impact his UFC 229 bout with Conor McGregor had on the sport. After acknowledging that he believed it was the biggest fight in MMA history, Dagestan’s first son quickly shifted his attention towards his rival’s 2018 pay-per-view spectacle.

“It was like, historical event, you know,” Nurmagomedov said. “It’s like MMA champion versus boxing champion but like, inside the fight many people don’t even remember what happened inside the fight. I think you guys gonna be agree with me.”

Always humble and conscious of his surroundings, Khabib realized he had gotten off-topic. Just as it appeared that he had reached a moment of clarity and was about to forever hold his peace, he made sure the masses knew that he believed Conor and Floyd were faking it.

“For me it was like more fake fight. This just my opinion. Maybe, maybe not,” Nurmagomedov added.

While Khabib made it clear that he wasn’t a supporter of gimmicky crossover matchups, he did say that Eagle FC was open to signing Jake Paul.

After Paul demanded his first MMA fight be against the former pound-for-pound king, questions were raised about whether or not ‘The Problem Child’ was truly interested in pursuing a career inside the cage.

When asked, Khabib chuckled at the thought of fighting Paul but stayed true to his word that Eagle FC would provide an opportunity for any fighter without a home.

Do you think McGregor Vs. Mayweather was staged?