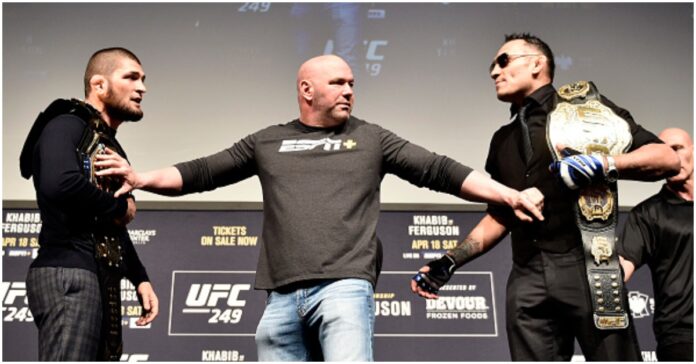 The long-standing rivalry between Tony Ferguson and Khabib Nurmagomedov appears to be far from over.

Between 2015 and 2020, Nurmagomedov and Ferguson were scheduled to square off a total of five times, but they never made it to the Octagon for varying reasons. The two were first set to compete at The Ultimate Fighter season 22 finale. Seven years later, Ferguson and Nurmagomedov are still eager to close the book on one of MMA’s biggest what-ifs.

During an appearance on The MMA Hour with Ariel Helwani, Ferguson laid down another challenge to ‘The Eagle’, this time as opposing coaches on a season of The Ultimate Fighter.

“I believe that when his dad [Khabib’s] said we were supposed to compete, I believe that. I would love to be able to coach against him in The Ultimate Fighter, how about that? You know, best man wins on the team. I guarantee my coaching is a lot better than yours, Khabib. Not a lot of people understand that.”

After hearing of Ferguson’s comments, Nurmagomedov appeared to accept the challenge and even offered Ferguson the opportunity to step inside the Eagle FC cage.

“Tony I like the idea about TUF, call your bosses and let them make an offer, but if they don’t have ideas, I myself will offer you a deal on the [Eagle FC] platform, we doing some business here you know,” Nurmagomedov tweeted.

Shortly after Khabib posted his response to the challenge, Tony Ferguson snapped back at the former lightweight champion and stirred the pot even more.

“We’re Private Contractors Fathead Remember? We Can Smell Ya From All The Way Over Here Lay Of The Sweets Meat Head,” Ferguson replied. “Now You Work For Me, BTW You Still Owe Me 200K & 20 Push-Up For The Homeless Keep Runnin’ It’s Tiramisu Tuesday- Champ -CSO- Merica MF.”

Following the successful defense of his lightweight championship at UFC 254, Nurmagomedov retired from the sport with an undefeated record of 29-0. Since then, ‘The Eagle’ has turned his attention to coaching fighters including lightweight contender Islam Makhachev.

Once considered the two best lightweights in the world, the highly anticipated match between Tony Ferguson and Khabib Nurmagomedov never materialized due to injuries, weight cutting issues and COVID. It appears there now may be a way for fans to finally see the two lightweight icons go toe-to-toe.

Would you like to see Tony Ferguson and Khabib Nurmagomedov compete on The Ultimate Fighter?