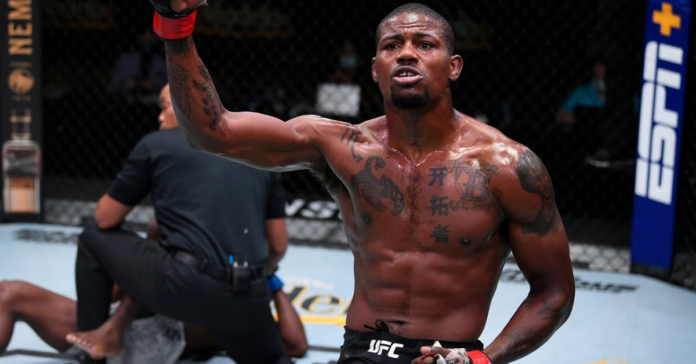 Kevin Holland reportedly subdued an active shooter with two other men. The UFC welterweight was enjoying his meal at RA Sushi restaurant in the Highland Park neighborhood of Houston when the incident occurred around 11.30 p.m. on Monday night.

According to Houston Police Department Sgt. Ricardo Salas, about 40 to 50 people were inside the restaurant when the suspect walked in and fired one shot in the bar area. Local reports suggest that two martial arts fighters sprung into action to take down the gunman with another customer helping in holding the suspect down. Patrick Robinson is one of the two MMA fighters alongside UFC standout Holland.

Robinson’s buddy is, of course, Kevin Holland, who refused to be interviewed by local media following the incident.

‘Trailblazer’ took to Instagram to post a story shortly after the incident where he appeared to be in good spirits.

“We got him down, apprehended him, got the gun away from him and the bag that he had,” Robinson told Ehling, before adding, “You see it on the news, or you see it on TV or the movies and stuff, but you never see it actually in life, and it is crazy that nobody got hurt.”

According to Houston’s NBC-2 TV station, police identified the suspect as a 24-year-old man, who was wanted for failing to appear in court on a criminal mischief charge. He also had narcotics on him at the time of his arrest.

It’s the second time in five months that Holland has helped police in a heroic act of vigilantism. In October, the California native apprehended a car thief in his coach’s neighborhood in Saginaw, TX after a person flagged him down to say their car was hijacked. The UFC star chased down the vehicle and held the suspect until police could arrive.

In an interview with The MMA Hour after that incident, Holland said, “I pull up, I got my coffee mug, so I’m like this time I’m gonna be prepared,” Holland said. “I got my coffee cup. I’m chasing down after him and he reaches down to kind of go like this, I don’t know if he’s saying stop or what? I go like this with the coffee mug, and then I hit him with a little sweep. Get on top, knee on belly, hit him with the little Khabib scarf hold. He was like, ‘I can’t breathe,’ so that’s when I picked him up, put him on the curb. I didn’t want to be like the cop with the Can’t Breathe guy, so I was like f*** it let’s just put him over here.” (Transcribed by MMA Junkie)

Holland ended his three-fight winless streak at UFC 272 with a second-round KO/TKO win against ‘Cowboy’ Oliveira at UFC 272 in his return to welterweight. He also called out another ‘Cowboy’ in Donald Cerrone who seemed interested in the fight but remains focused on his next bout against Joe Lauzon at UFC 274 on May 7.

Is Kevin Holland the closest thing we have to Batman in the UFC?