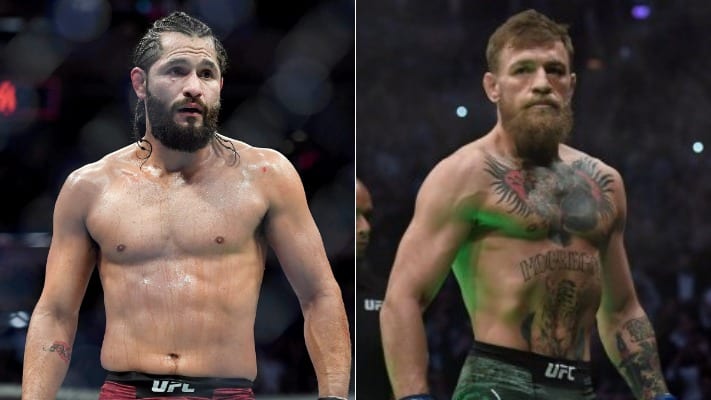 Jorge Masvidal has skyrocketed his own stock with a tremendous 2019 run under his belt. “Gamebred” won all three of his fights this year via KO or TKO. The first being a second-round starching of Darren Till in enemy territory from London.

He followed that up with a record-breaking five-second knockout win over Ben Askren. And then, Masvidal became the Baddest Mother F*cker in the game by defeating Nate Diaz via controversial third-round TKO – by way of a Doctor’s Stoppage – in the main event of UFC 244 from Madison Square Garden.

Now, Masvidal has a plethora of options for his next fight in 2020, which will likely draw big business. Options stretch from a welterweight title opportunity, to facing an upset Nick Diaz, all the way to the possibility of fighting UFC megastar Conor McGregor. The Irishman took a subtle jab at Masvidal following UFC 244 on Twitter.

Speaking on “The Dan Le Batard Show” today, Masvidal was again asked about possibly fighting McGregor down the line. Masvidal said McGregor talked a lot about fighting the winner of himself vs. Diaz at UFC 244, notably picking Diaz to win the fight.

However, after Masvidal actually won, the Floridian said McGregor hasn’t made a peek since. (H/T MMA Junkie)

“To be quite frank, he was flirting with fighting the winner when the possibility of the winner was Nate,” Masvidal said. “And he kept throwing it out there. He even made his prediction he thought Nate would win. Since I’ve won, he hasn’t said a peep to address me or nothing.”

Masvidal said he’s not going to beg or bully McGregor into fighting him, and is instead focused on landing the fight that makes him the most money.

What do you think about McGregor not calling out Masvidal after his win over Diaz?