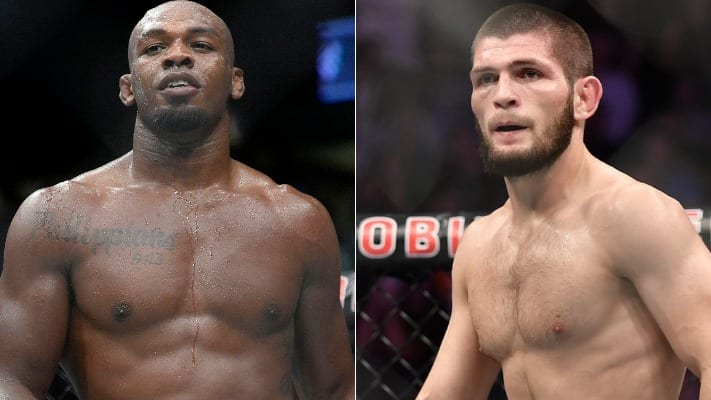 After Nurmagomedov shocked the MMA world with his announcement, he also asked the UFC to include him at the top of their pound-for-pound list when they put it out on Tuesday. Jones then took to Twitter to offer his own take on the rankings.

Jones said that he was happy to let Nurmagomedov have the #1 spot – until he takes it back after winning the heavyweight title. The ex-champ currently sits atop the rankings, as he has for most of his lengthy run as light heavyweight champion. In a follow-up tweet, Jones offered evidence to his claim as the number one fighter.

Jones’ title run started all the way back in 2011. Although he was never defeated during that run, he did have the belt stripped from him three times for drug and conduct violations. His only career loss came by a questionable disqualification against Matt Hamill. Following a hotly contested win over Domink Reyes, he relinquished the title one last time with his sights set on Stipe Miocic‘s heavyweight crown.

Nurmagomedov has been on a similar run, though his title reign only began in 2018. However, he ends his career undefeated and owns wins over some of the sports biggest names in Justin Gaethje, Dustin Poirier and, of course, Conor McGregor.

Both Jones and Nurmagomedov have rightful claims to the “All-time Great” title. That being said, Jones wanted to make sure people weren’t letting the emotions of Nurmagomedov’s retirement cloud their judgement.

It appears the light heavyweight great wasn’t interested in getting into a Twitter war, however, as he made sure to congratulate Nurmagomedov and wish him the best in his future endeavors.

Both men will continue on their life journeys with uncertain paths in front of them. No one is quite sure what Nurmagomedov intends to do following his retirement. Jones, on the other hand, has left the light heavyweight division, but has since hinted that he may return one final time for a fight against newly crowned champ Jan Blachowicz.

Whatever both men go on to do, the debate about who is the greatest will be sure to follow them.

Who do you think is the All-time Greatest MMA fighter? Jon Jones, Khabib Nurmagomedov, or someone else?