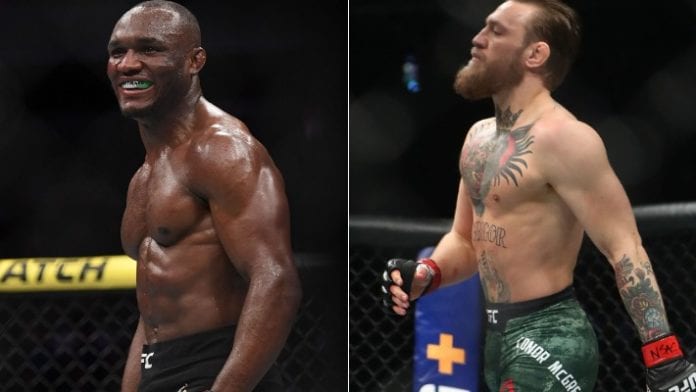 Kavanagh: McGregor Has Knockout Power For Anyone Near His Weight

John Kavanagh believes a motivated Conor McGregor can beat anyone near his weight class — including UFC welterweight champion Kamaru Usman.

There was recent chatter of McGregor potentially facing Usman with the possibility of becoming the first-ever three-weight UFC champion if he came away with the win. In the end, it was just rumors with Usman now set to defend his title against Gilbert Burns at UFC 251 next month.

But what if it actually happened and how would it play out? Usman has the size and wrestling advantage and given how McGregor performed against Khabib Nurmagomedov, most observers would predict there would only be one winner.

However, the Irishman’s head coach John Kavanagh believes if motivated, McGregor can beat just about anyone put in front of him.

“That would be an interesting one,” Kavanagh said of McGregor vs. Usman on a social media chat recently. “There is a fair size difference in there. Look, I’ll be honest — anybody up to or around about his weight class, if there is a very motivated Conor, I think he beats any of them.

“He easily has knockout power up to that weight class and if he was to put in a serious training camp, I think he wins.”

The recurring theme here seems to be that McGregor wasn’t motivated or didn’t have the right training camp for his defeat to Nurmagomedov. It’s something McGregor has stated repeatedly along with other factors such as having an injured foot.

We’ll only know for sure once we see a rematch. Or if McGregor were to move up and face Usman.

How do you see McGregor vs. Usman playing out?