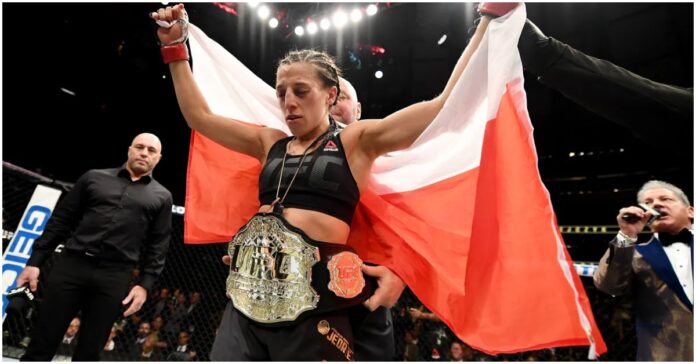 Joanna Jedrzejczyk hasn’t competed inside the octagon for over two years since her all-out war with Weili Zhang at UFC 248. Although her passion for fighting will never die it appears more lucrative options have become available to the former champion away from the sport.

Inside of the octagon, Jedrzejczyk was extremely efficient in her work and now it seems she is doing the same outside of the cage.

Jedrzejczyk along with building her own business empire in Poland and training daily has also been taking on brand endorsement deals as well as making television appearances developing her name outside of combat sports.

Speaking on The Fighter Vs. The Writer the former strawweight champion explains how she has adapted to these new adventures and how she finally began to understand her worth away from fighting.

“I wanted to make sure that everything is going the right direction. Because when my fighting career blew up, I was focusing only on my fighting career, and it was good, but I like to do so many things. I’m personal with so many hobbies, passions, businesses. I wanted to make sure everything was going in the right direction. Now I have a clear head, a strong heart, and I can be focusing only on training.”

Although avenues are expanding for Jedrzejczyk she still feels sadness not competing inside the octagon and remains desperate to get back inside to prove herself again, on the condition she is well paid.

“I feel like I’m making more money outside the octagon,” Jedrzejczyk said. “It’s kind of set for me. Because my big hobby, big passion, became my job with fighting. It’s all happening, we’re talking because of my legacy and how dedicated I was, and I am, because of MMA and my job.

“It’s kind of sad but I get as much as I can from here and now because I’ve been doing this for 18 years, you all know this, but my life got changed when I got into the UFC and became the champion and got more opportunity. I started making money, and I’m trying to get as much as I can, but I’m doing things I really love to do. Yeah, I accomplished a lot in this sport and it’s not about the money, but I feel like I’m in the sport where I can ask for more money because I deserve this. I deserve this and I know my worth.”

Despite advice from those around her to step away from the sport, Jedrzejczyk remains unfazed in her focus and her love for the sport certainly has not changed.

“It’s hard because so many people are like, ‘Maybe you should stop fighting, you shouldn’t even be doing this,’” Jedrzejczyk said. “You do this, you do that, you have this business, the other business,’ but you can’t stop the love. Love is real and it’s the only real thing in this world.

“I love this sport. I feel like I want to do it. I feel like I can do it. So that’s the thing. It’s hard because every day I get messages, ‘Are you retired?’ or, ‘She is retired,’ or other things. It’s hard.” (Transcribed by MMAFighting)

Do you think we will see Joanna Jedrzejczyk return?