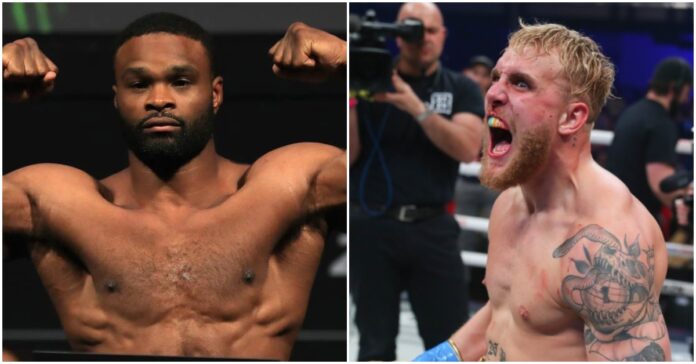 Jake Paul is hoping to put the claims off a ‘No Knockout’ clause to bed following on from the announcement he will be offering Tyron Woodley the chance at $500,000 if he is able to KO or TKO ‘The Problem Child.’

Paul took the opportunity to speak on this matter at a virtual news press conference yesterday.

“You know me. I like to make things more interesting all the way across the board.

“There’s been this rumour going around about a ‘no knockout’ clause in my contracts. Someone started it and everyone else ran with it. People are like sheep. They believe everything they read or see, and they go which way the crowd is going.

“That’s been a rumour that’s completely untrue. I’d be in jail for rigging fights. That’s illegal. We just wanted to squash that rumour right away and from now on we’ll be giving bonuses to my opponents if they can knock me out. We want to incentivize them and prove to the media and the world that all of these rumours aren’t true.”

This was also backed by Jake Paul’s adviser Nakisa Bidarian who pointed out the contractual stipulation in place for Woodley.

“And to be clear, that’s contractual in Tyron’s agreement. There’s a contractual agreement that if he knocks out or TKOs Jake, he’ll get a $500,000 bonus payment.”(Transcribed by MMAJunkie)

Following on from their previous meeting which saw Jake Paul defeat Tyron Woodley via split decision, Woodley was forced to fulfill his obligations by getting a Jake Paul tattoo to get a shot at the rematch, and a chance of redemption.

What is next for Jake Paul?

Does another win here over Tyron Woodley boost Paul’s credibility as a boxer? The initial matchup was supposed to be the big test for Jake Paul. Many people felt he had bit off more then he could chew when his initial bout was scheduled with Tommy Fury before the brit had to had to withdraw due to injury. Now for Woodley to come in on short-notice and beat Paul is going to be a difficult task but one that he is surely going to be fired up for.

Where does Jake Paul go from here if he beats Woodley? Paul vs Fury? I’m sure Tommy Fury like many followers of boxing will be hoping to see the matchup scheduled as soon as possible.

Who do you see winning the rematch, Jake Paul or Tyron Woodley?