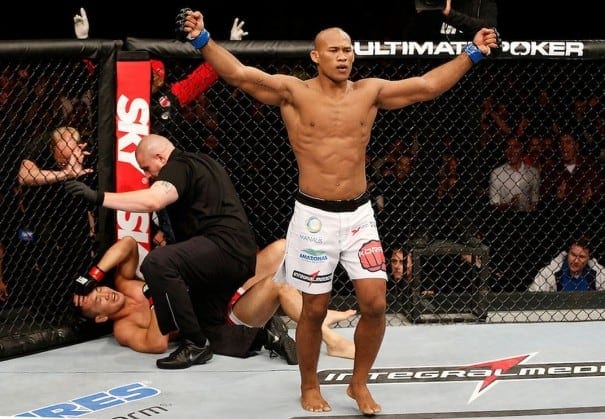 With middleweight king Chris Weidman finally defending his title against Vitor Belfort at this past weekend’s (May 23, 2015) UFC 187, one of the current hot topics in mixed martial arts (MMA) just whom “The All-American” will meet next.

Prior to UFC 187, it was widely perceived that No. 1-contender Luke Rockhold would be next in line for a title shot. The American Kickboxing Academy (AKA) product has put together four-straight stoppage wins inside of the Octagon, and made a huge statement when he brutally submitted and dominated former light heavyweight champion Lyoto Machida at April’s UFC on FOX 15.

However, there is one man who may be competing with Rockhold to earn the next title shot, and that would be surging No. 2-ranked Ronaldo “Jacare” Souza, who has rattled off eight-straight wins including seven finishes. “Jacare” was most recently seen scoring a first-round submission win over late-replacement Chris Camozzi at UFC on FOX 15 as well.

Speaking with Portal Do Vale Tudo (via Bloody Elbow), Souza gave his take on the situation, noting that Weidman is a dominant and skilled champion, but that he’s here to take the belt from “The All-American”. The Brazilian also noted Rockhold’s only setback in the UFC, a devastating 2013 knockout loss to Belfort, as a reason why he should be awarded the title shot as opposed to the AKA product:

“I have seen [Weidman] fight at ADCC, he is really good on the ground. Not to mention he is a Renzo Gracie blackbelt, so he is not just anybody. Many people say he didn’t convince them yet, but yes, he did. I’m here to take the belt off this great champion who is Chris Weidman. There’s no doubt I’m next. I’m very confident, no matter what my ranking number is. I’m undefeated in the UFC, it has been five straight wins so far. The man ahead of me has already been knocked out and that counts a lot.”

UFC president Dana White, although noting that Rockhold was the No. 1-contender, also mentioned that “Jacare’s” manager told the UFC that Souza was ready to go, and that the title shot could indeed be given to the Brazilian.

Another fact worth bringing up in this debate, is that Rockhold actually owns a victory of Souza when the two met back in Strikeforce in 2011. “Rocky” has also faced stiffer competition in the UFC, despite both men arguably being worthy of title shots.

Who should be next to meet Weidman?